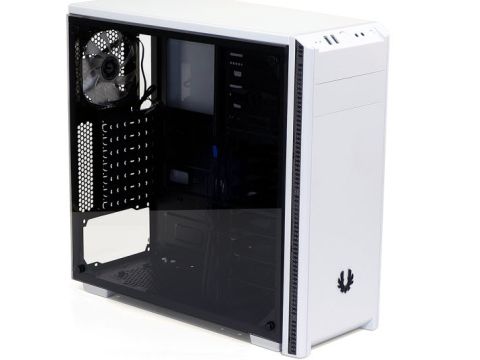 I’ve been treating glass side panels as an approximate $30 upgrade per side for a while, understanding that smaller panels will cost a little less and larger panels a little more. It’s not that tempered glass is expensive, but that it adds to the shipping cost and increases the likelihood that the case will arrive damaged at the distributor. If the total cost of a panel including any potential post-production expenses is $20, and everyone who handles the case wants to make a little money, $30 wouldn’t be a bad deal for consumers. But then BitFenix comes along with a complete case that costs only twice the assumed price of that upgrade. Has the company destroyed my pricing theory?

We can begin today’s analysis by noting that the Nova TG is the lightest glass-paneled case we’ve ever tested, weighing even less than many sub-$100 plastic-windowed steel cases. And we know thin steel side panels weigh much less than glass. This can only mean that either the glass is super thin, that the remaining steel is super thin, that the case is smaller than most competitors, or that there are economies on all fronts.

At 17.3” tall, the Nova TG has almost textbook mid-tower proportions. It would have been only 7.2”-wide without side-panel protrusions, and it even has a 5.25” bay cover centered within the space of three external bays.

The 4mm-thick glass panel isn’t very thin. The Nova TG isn’t any thinner than similarly-priced competitors on front-panel features, either. We find the now-standard pair of USB 3.0 ports, headphone and microphone jacks, power and reset buttons, and LEDs to show power and hard drive activity, angled around 45° at the top of the face panel to ease access in both desktop and under-desk placements.

BitFenix didn’t skimp on power supply dust filter. It’s a standard nylon screen version that can just as easily be rinsed clean as blown out or vacuumed. It is a little short, since the Nova TG doesn’t have a bottom-panel fan mount to make use of the same filter.

The white exterior paint didn’t suffer from noticeable economies either, being both smooth and shiny, and BitFenix even painted the interior a stylish black. Yet we do see the first inklings of the Nova TG’s economy from the rear, with its side panel bubble for stuffing cables and its knock-out slot covers. The Nova TG doesn’t even include any replacement slot covers in its installation kit.

Cracking open the right side-panel, we find negligible space between the back of the motherboard tray and the side panel’s mounting flange. Indeed, the side bubble noted above is an actual requirement for running cables behind the motherboard; there's a mere 5/8” of space beneath the bubble. Also notice that the motherboard tray steps inward towards the drive bays at the front of the case, to further assist cable management.

Pulling away the single-5.25”-bay plastic façade, we find three 5.25” bays underneath. Users who’d like to put 3.5” drive adapters here will need to use their own, as BitFenix includes none. We also find a fan tray capable of holding either two 120mm fans (or one 140mm), with its single factory-installed, unfiltered fan on the lower mounting holes.

Crafty builders will notice around 29mm of space inside the plastic face panel, which would allow a 25mm-thick radiator to be mounted there. The unused lower 5.25” bay could even serve as a place to pass through cooling lines, though there isn’t much space at the bottom for the radiator’s end cap. The 45° angle there comes right up to fan level.

Next Page Installation & Configuration
6 Comments Comment from the forums