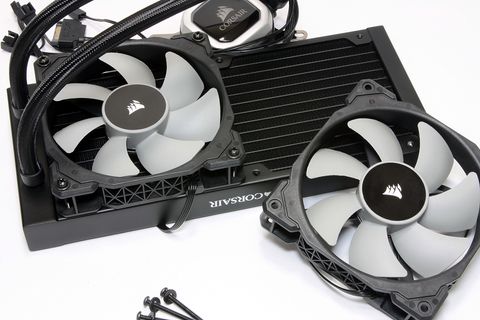 The H100i Pro is right on the heels of the larger 360mm NZXT Kraken X72, and manages to steal every bit of thunder from its larger sibling, the 360mm H150i Pro. This creates a curious product rivalry within the ranks of Corsair.

Comparing both Corsair products, we can see where the additional cooling power of the H100i Pro comes from--its faster 120mm fans. Of course, as we have so often seen, higher fan speeds often equate to higher noise levels.

As expected, the H100i Pro takes a hit with those 2400+ RPM fans in the registered noise level department. Things aren’t all that quieter at 50% speeds either, but perhaps not all is lost.

Great performance coupled with noisy fans provides for an ugly hit for the H100i Pro on our acoustic efficiency chart. With relatively close thermal results, the larger differences in decibel levels amplify the result offsets.

At a retail price of $120, the Corsair H100i Pro brings the performance value graph back into check once again. The price premiums of the larger 360 AIO coolers creates a cost and performance handicap that bodes well for the 240mm liquid coolers.

Thermal imaging from the FLIR One PRO camera provides expected heat signature differences at 100% and 50% fan speeds. The 240 radiator itself shows marked elevation of thermal loads at lower airflow, which translates into a noticeable difference in temperature of the tubing and CPU cooling block.

The release of the new H100i Pro makes for an interesting debate. We weren’t originally impressed with the release of the H150i Pro, especially considering its large, 360mm footprint. The tables turn with the H100i Pro though, thanks to the use of more-aggressive fans over the radiator cooling field. This results in just-as-impressive load temperatures at 100% fan speeds as the larger model, with a 33% smaller cooler. The more-compact H100i Pro also costs $40 less than its 360mm sibling, while taking up less space inside your case.

By utilizing faster 2400 RPM fans on the H100i Pro, Corsair delivers system builders the option of a great-performing liquid cooler with manageable noise levels. When paired with a smart fan curve, idle and lighter loads will allow for quiet operation. When your CPU cores roll up their sleeves and get to work, the powerful fans will certainly make their presence known. But our tests show that this cooler can keep your CPU temps cooler under load than some larger, pricier alternatives.

The only reason we can see to opt for something else is if you want to maintain the quietest operation even under heavy load, or if the H100i Pro doesn’t have enough RGB for your rainbow-lit dream build.