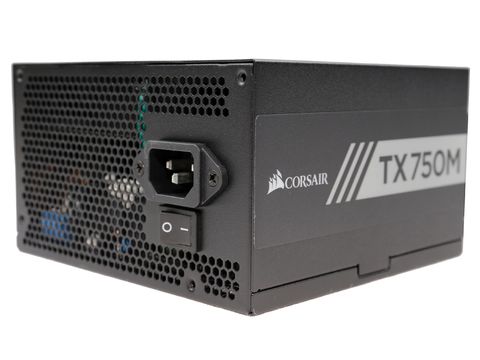 Before proceeding with this page, we strongly encourage you to a look at our PSUs 101 article, which provides valuable information about PSUs and their operation, allowing you to better understand the components we're about to discuss. Our main tools for disassembling PSUs are a Thermaltronics soldering and rework station and a Hakko FR-300 desoldering gun. Finally, for the identification of tiny parts we use an Andonstar HDMI digital microscope.

Again, the TX-M series is built by Great Wall, the same OEM that makes Corsair's exceptional SF models. The design is typical of a Gold-rated unit, featuring a half-bridge topology on the primary side, along with an LLC resonant converter. On the secondary side, FETs regulate the +12V rail, while the minor rails are generated by a couple of DC-DC converters. All in all, this looks like a well-built platform. Even its capacitor selection looks decent. Aside from mid-range Chemi-Con KZEs, we also find several Rubycon caps featuring notably longer lifetimes.

Typically, the first part of the transient filtering stage is located right behind the AC receptacle. There we find one X cap and two Y caps. The same filter continues on the main PCB with two more Y caps and an additional X cap. We also find two CM chokes and an MOV, the latter used for suppressing voltage spikes coming from the mains network. There is also an NTC thermistor for restricting high inrush currents. It's supported by a bypass relay.

The bridge rectifiers (2x Shindengen U20K80R) are bolted onto the primary heat sink.

The APFC converter uses two APEC AP65SL099AWL FETs and a single CREE C3D06060 boost diode. Two parallel bulk caps are provided by Chemi-Con, and they have a combined capacity of 660uF. The APFC converter is a Champion CM6500UNX IC.

Two STi STP24N60DM2s are used as main switching FETs. They're configured in a half-bridge topology and supported by an LLC resonant converter for increased efficiency.

The resonant converter is a Champion CM6901X IC.

The filtering caps on the secondary side are mostly provided by Chemi-Con, belonging to the company's mid-range KZE series. We also find some higher-quality Rubycon electrolytic caps belonging to the ZLJ, YXF, and ZLH lines. We're also greeted by several Chemi-Con polymer caps.

The supervisor IC is a Sitronix/Infino ST9S429-PG14, which supports most protection features (OVP, UVP, OCP, SCP, PG) except for over-temperature protection. Many supervisor ICs don't support OTP, so it's usually implemented through other circuits instead.

The 5VSB circuit looks like it's generated by a combination of AP04N60H-HF and CEF04N7G FETs.

A small modular board features several polymer Chemi-Con caps for reducing ripple on the rails even more.

Great Wall's soldering quality is quite good, as you can see in the photos above.

Corsair adds its own logo to the 120mm cooling fan (12V, 0.22A). The company says it arms the NR120L with a rifle bearing, which is an enhanced version of the sleeve bearing. It has a shorter rated lifetime than fluid dynamic bearing-based fans (about the same as a double ball-bearing fan) and a lower price point. Rifle bearing fans are usually found in mid-range PSUs like the TX-Ms.