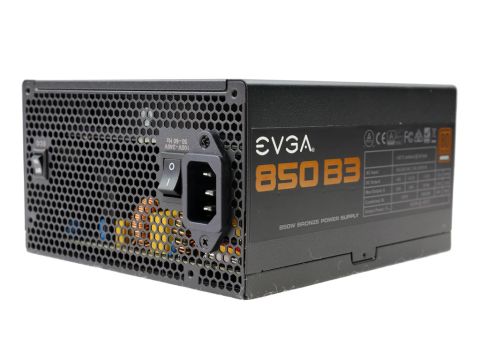 The 850 B3 achieves good overall performance, despite the 3.3V rail's bad transient response (hopefully EVGA fixes that as soon as possible, since the rail failed all of our tests). But regardless of a strong showing in most of our benchmarks, this PSU appears to have a serious flaw: our retail sample finished its OPP test and wouldn't fire back up. Apparently, something broke on the secondary side. Although we're glad the 850 B3 didn't blow up like the 450W model, this is our second (so far) B3-series power supply to die on the bench. And given that the 850 B3 is the family's flagship, we are worried about the platform's reliability.

EVGA still hasn't answered our concerns about the 450 B3 (or offered a second sample), and now we have another one dead B3 PSU. We can only guess that the over-power protection's triggering point is set too high in this unit as well. Although the PSU shut down under high stress, the fact it won't turn back on suggests an on-board component failed before the protection feature kicked in.

These aren't press samples we're working with here since EVGA didn't send any to us. That means we can be confident we don't have a hand-selected PSU. Beyond the 450 and 850 B3, we also bought the other models in this family and plan to explore whether the issue of premature failure plagues them as well. We are highly committed in our work, and when a company chooses not to send out a product that could be popular with our audience, we go out and get it ourselves.

The 850 B3 could be a very good PSU. But the fact that it stopped working once we pushed to find the OPP feature's triggering point makes this model much less appealing. Despite a low efficiency rating, EVGA's 850 B3 packs some nice features including a semi-passive mode and Japanese capacitors on the main PCB. Its power-good signal is accurate, and the hold-up time we measured is long enough to easily meet the ATX spec's demands. Fully modular cabling is another compelling advantage, along with lots of available PCIe connectors.

Until we get to the bottom of failures across EVGA's B3 family (something that would almost require the company's cooperation), we do not recommend the 850 B3. While it's apparently less likely to treat you to a fireworks show (unlike the 450 B3), an 850W PSU selling for $100 that dies after OPP testing is not good. Super Flower's platform needs fine-tuning to improve its reliability (and safety). As of right now, it appears the 850 B3 wasn't tested extensively enough before it goes into mass production. After all, tuning takes time, increasing production costs, and that's not a good thing when it comes to budget-oriented PSUs.

Prev Page Performance, Value, Noise & Efficiency
12 Comments Comment from the forums
Be In the Know