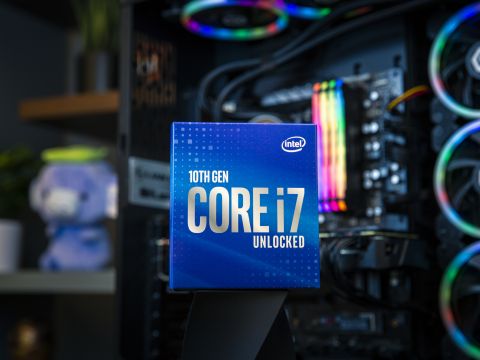 Intel can't contest AMD's commanding lead in rendering applications on mainstream desktop platforms, or any other platform for that matter, but it can compete on price and reduce performance disparities.

The Core i7-10700K beats or matches the 9900K across the full spate of our rendering tests, both at stock and overclocked settings, but the 12-core Ryzen 9 3900X is a potent foe. That chip retails for roughly $415, which is a worthy $28 premium over Intel's MSRP if you're focused on productivity work. The 3900X's bundled cooler also sweetens the deal.

The Ryzen 7 3800X carves out a few wins, but the disparity between the two chips is slim at stock settings, and the Core i7-10700K leads after overclocking.

Moving on to the single-core rendering workloads, the Intel processors maintain a solid lead, particularly after overclocking.

The single-threaded LAME and FLAC encoding tests respond well to per-core performance, giving the overclocked 10700K a convincing position in the performance charts.

AMD's Ryzen can't match Intel's single-threaded performance in those lightly-threaded encoding workloads, but the chips are more competitive in the threaded SVT-AV1 encoder built by Intel and Netflix. Again, the 3800X and 3700X take the lead over the 10700K at stock settings, but those deltas are slight. After overclocking, the 10700K regains the lead.

The threaded HandBrake x264 and x265 tests really speak to the AVX performance improvements AMD made to the Zen 2 architecture. The stock 10700K lags the Ryzen 7 3800X and 3700X in the x264 test, but surpasses the chips in the AVX-heavy x265 benchmark. Overclocking helps separate the 10700K from the pack, but the Ryzen 9 3900X again asserts itself with leading performance.

Browsers tend to be impacted more by the recent security mitigations than other types of applications, so Intel has generally taken a haircut in these benchmarks on fully-patched systems.

Single-threaded performance still reigns supreme in these tests, so it isn't surprising to see the Comet Lake chips largely take the lead at stock settings, and completely separate themselves from the pack after tuning. The Ryzen chips fare better in the Microsoft Edge benchmark because it uses the copious helping of threads more effectively.

Clock rates benefit the majority of the GIMP image processing and Microsoft Office tests, both of which benefit from the Core i7-10700K's high boost clocks.

At stock settings, the Ryzen 3800X and 3700X outperform the Core i7-10700K, and even the 9900K, in the LLVM compilation benchmark. Overclocking swings the lead in the 10700K's favor, but not by a large margin. The Ryzen 9 3900X again proves its mettle in this threaded task, easily sweeping the Intel processors.

The 7zip and Zlib compression/decompression benchmarks rely heavily upon threading and work directly from system memory, thus avoiding the traditional storage bottleneck in these types of tasks. As we've come to expect, the Ryzen processors dominate in 7zip compression tasks. The 10900K is a bit more competitive in the decompression test, but even overclocking the 10700K doesn't give it an edge over any Ryzen processor.

The heavily-threaded y-cruncher benchmark, which computes pi using the taxing AVX instruction set, finds the 10700K notching minor gains over the 9900K while trailing the Ryzen 3000 series at stock settings in the threaded test. Overclocking boosts the 10700K up the charts, but the Ryzen 3800X and 3900X still lead. Clock rates come into play during the single-threaded y-cruncher test, so the Intel processors take the top of the chart.