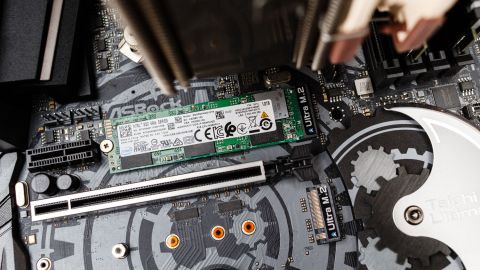 The Intel 665p is a tough sell at current pricing due to the intense competition it faces in the market. Corsair’s Force MP510 and Silicon Motion’s P34A80 both offer up to 3.5 GBps performance for the same price, or less. While the 665p features a 50% higher endurance rating than the previous-gen 660p, it still lags behind most of the competition. The MP510 offers almost six times the rated endurance. If you're looking to satisfy write-heavy workloads, be sure to check out our best SSDs article for alternatives.

Intel’s SSD 665p offers various improvements over its predecessor. The company markets the SSD 665p as a device that will deliver “PCIe performance and endurance for everyday computing.” Having tested it, we can confirm that it will keep up with most normal desktop usage patterns. It’s snappy in operation, and offers plenty of speed for most users. Plus, it is quite efficient.

While it didn’t top the leaderboards, the drive outperformed its predecessor by a margin of 5-10%. It also kept up with some of the fastest SSDs throughout our spate of real-world workloads. It also loaded games even faster than a new PCIe 4.0 NVMe SSD.

Performance-wise, the 665p's only fault is that it has slow direct-to-QLC write speeds that clocked in at only 185 MBps. However, that wouldn't be a factor for most users unless they do massive file copy operations on a regular basis. The refined intelligent dynamic write cache also recovers quite quickly.

WD’s Blue SN550 gives the 665p a run for its money, though, and hits where it hurts. This holiday season Intel has slashed prices for the 660p, making it one of the top bang-for-your-buck SSDs available. However, Intel’s 665p doesn’t follow that trend and comes into the market at a premium. It costs $25 more than the WD Blue SN550 that boasts more endurant TLC flash.

For the price, the value scale tips in WD’s favor if you're looking for a 1TB upgrade, at least at this time. The WD Blue SN550 has much higher direct-to-TLC write speeds when the SLC cache runs out, and twice the rated endurance, too. The Intel one-ups the WD with a 2TB maximum capacity, on the other hand, so if you're looking for a capacious 2TB model, the Intel 665p is a great value. However, those models aren't freely available at retail yet, but we'll update as soon as one hits our labs.