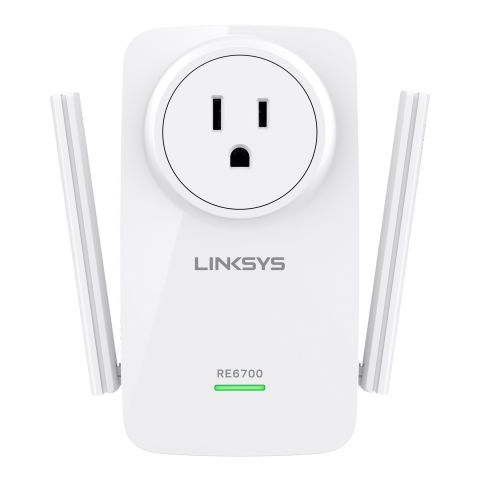 We conducted throughput tests with Ixia's IxChariot at ranges of five, 25, 50 and 75 feet in both the 2.4GHz and 5GHz bands to evaluate the RE6700's performance. For comparison, we're including measurements from a number of recently-tested competitors. See How We Test Wireless Range Extenders for more details on our test methodology and setup.

At a range of five feet, Linksys' RE6700 more than doubles the performance we've seen from other AC1200-class extenders in the 2.4GHz band. The RE6700 obliterates its competition at this range.

Testing in the 5GHz band also shows the RE6700 leading, though by a much narrower margin. Netgear's EX6200 comes close in a comparison of maximum throughput, but doesn't match Linksys' average.

At 25 feet, the RE6700 continues to lead in the 2.4GHz band. Throughput figures just under 17 Mb/s (minimum) and more than 25 Mb/s (average) mean the RE6700 can easily accommodate an HD video stream from most providers at this range.

The 5GHz band once again tightens the race, with Amped Wireless' REA20 catching up quite a bit. The RE6700 still takes the crown in our minimum and average throughput measurements though, and it's edged out slightly in maximum throughput by its older sibling, the RE6500.

At a range of 50 feet, our results become more interesting. The RE6700 is the maximum throughput leader, but Amped Wireless' REA20 scores a win in minimum and average throughput using the 2.4GHz band.

In the 5GHz band, Linksys' RE6700 is bested by Amped Wireless' offering in every metric except maximum throughput. They achieve similar averages, the RE6700 shows better maximum figures and the REA20 maintains superior minimums. Some of the other competitors also beat the RE6700 in maximum throughput. Regardless, the average figure is best for making real-world comparisons. The RE6700 and REA20 nearly tie in this particular test.

The graph above shows the measured wireless signal strength from several AC1200-class devices. The RE6700 is competitive at the beginning, and achieves the highest measurement at a range of 40 to 65 feet. Since this distance represents a typical usage case for a range extender, we can safely say the RE6700 meets or exceeds its competition in the 2.4GHz band for what most enthusiasts need from it.

The 5GHz band always reflects less signal strength than its 2.4GHz counterpart, and the graph above shows this for every device benchmarked. The RE6700 starts out stronger up to about 15 feet, and resumes its lead between 30 and 45 feet in our measurements. Beyond 45 feet, the Amped Wireless REA20 edges out the RE6700 in signal strength by a small margin.

We also conducted a separate test designed to investigate the RE6700's Cross Band feature. We connected a laptop via gigabit Ethernet on the bottom of the RE6700 and used it as a wireless bridge. We then tested the throughput with our extender at 50 feet away from the router.

The results are interesting. If we limit the extender to use only the 2.4GHz band, we see throughput that is higher than it would be with a wireless client device (wireless-to-wireless), but much lower than if we exclusively use the 5GHz band. If we force the RE6700 to not use the Cross Band feature, we see the penalty imposed by having it available to serve other wireless clients in the same band. This is how typical range extenders/repeaters work. When we enable Cross Band in auto mode, the stream reaches its maximum throughput figures, showing the feature's benefit.

We also wanted to see what impact, if any, the use of the pass-through port had on an attached device's power consumption. For this test, we connected a GE telephone and Dell monitor to the pass-through port, and used our Kill-A-Watt meter to test their power draw. We compared the results to the draw of the same devices plugged directly into a wall without the RE6700 in the mix.

The RE6700's impact is minimal (0.2W for the phone and 0.1W for the monitor). When we plug the Kill-A-Watt meter directly into the wall plate to measure combined wattage, we see even less effect. It appears that the RE6700 is an efficient device, and it has very little overall impact on attached devices.

Linksys' RE6700 raises the bar for performance at its price point. We were very impressed with its throughput, especially when you consider it costs $120.

The lack of an AP mode and some other missing features are its downside, but you won't find a competing model that is easier to configure and use without spending significantly more money. Throw in the DLNA audio streaming feature, the power pass-through port and the media bridge option, and you have a small package that delivers big on functionality.

Sand Dutcher is an Associate Contributing Writer for Tom's Hardware.