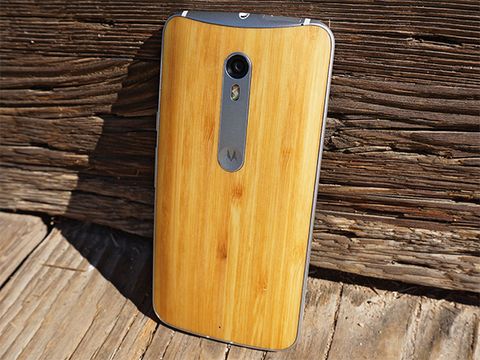 Previous versions of the Moto X produced decent images in good lighting, but struggled in low-light conditions. Autofocus speed was also a bit slow. For the Moto X Pure Edition and its derivatives, Motorola looks to correct these issues and improve overall camera performance by equipping them with Sony’s Exmor RS IMX230 sensor. This is a stacked CMOS sensor featuring backside illumination (BSI) and a 1/2.4” optical format. At 21 MP it’s one of the higher resolution sensors you can get in a smartphone, which should capture a lot of detail. The 1.12μm pixel size is pretty standard for this type of sensor. We’ll see if the smaller pixels and lack of optical image stabilization (OIS) hurt low-light performance in our image quality tests.

Note: For an explanation of camera hardware and terminology, please see our Camera Phone Technology 101 article.

The Pure Edition’s new rear camera also includes phase detect autofocus (PDAF). Using up to 192 AF points on the sensor, the camera is quick to focus in most cases. Scenes with higher dynamic range trip up the PDAF routine and cause the camera to fall back to the slower contrast detect AF (CDAF) method, however.

The optical stack consists of six lens elements with an f/2.0 aperture. This gives the Pure Edition’s camera one of the largest aperture areas currently available, letting in 6% more light than the lens in Samsung’s Galaxy S6 edge+. It also lets in 9% more light than the OnePlus 2’s lens and 53% more light than either the Asus ZenFone 2 or iPhone 6s Plus. This should improve low-light performance and help compensate for the higher-resolution sensor’s smaller pixels.

Motorola equips the Pure Edition with a new front camera too. Resolution increases from 2 MP to 5 MP to capture more detail. The sensor uses 1.4μm pixels, and the wide-angle lens has an f/2.0 aperture. There’s also an LED flash, which is still a fairly unique feature for front-facing cameras. The higher image resolution, larger aperture, and LED flash combine to produce some Facebook-worthy selfies, and the wide-angle lens helps get your entire group into the shot.

Motorola’s camera app makes shooting pictures and videos as simple as possible. The camera controls all of the settings automatically by default, requiring you to only tap the screen to take a picture. That’s right; there’s not even a shutter button, although, you can use the volume button to snap a picture. Long-pressing on the screen activates burst-mode, which takes multiple shots (about five) per second.

The app provides minimal control over focus and exposure and that’s it. There’s no sophisticated manual mode, image filters, or artsy effects to apply. You can set the focal point manually by simply dragging the focus ring over the desired object. Sliding the sun symbol around the focus ring adjusts exposure. There’s also a 4x digital zoom that’s controlled by sliding your finger up and down the right edge of the screen.

Additional controls are accessed via swipe motions. Sliding your finger inward from the left edge of the screen opens a carousel menu of settings: HDR, flash, video mode, photo resolution, shot timer (3 or 10 seconds), panorama, geotagging, shutter sound, and Quick Capture. Sliding your finger inward from the right edge of the screen allows you to browse through your latest images and edit them.

The Quick Capture feature is a clever way to launch the camera app with two flicks of the wrist. This works from the lock screen or inside any app. Repeating the gesture with the camera app already open switches between the front and rear cameras. This feature can be turned off but is on by default.

Other than a panorama mode, the front-facing camera supports all the same features as the rear camera, including burst-mode, automatic HDR, and the manual focus and exposure control.

Just like with still photos, Motorola’s camera app offers only basic video recording options. There’s no 1080p@60fps mode available, even though the camera sensor supports it, and slow motion video is limited to 720p@120fps (played back at 30fps for a 1/4 speed slow-motion effect). It does offer 1080p@30fps recording at a reasonable bit rate for both the front and rear cameras. The rear camera can also record 4K UHD videos without any restrictions on the recording duration.

Video quality using the rear camera is similar for both 1080p and 4K except for the obvious difference in resolution. Outdoors in good lighting, white balance is very good, and the camera adjusts exposure smoothly and quickly when transitioning from bright areas to shadows. The camera’s PDAF also works well, with almost no focus lag. The only quality issue in good lighting are noticeable compression artifacts—not just around objects but also large, flat surfaces—when moving the camera. Predictably, video quality in low-light conditions suffers. White balance is still generally good, but there’s a significant amount of noise in the video, somewhat negating the resolution advantage of the 4K mode. The camera also has more trouble focusing, frequently falling back to the much slower CDAF method.

While the Pure Edition’s camera does not have optical image stabilization (OIS), it does use electronic image stabilization (EIS) to help steady video. This removes some high-frequency jitters, but is not as effective as the methods used in some other flagship cameras.

One nice feature is the rear camera’s ability to use high dynamic range (HDR) when shooting both 1080p and 4K video. To use HDR with video you must activate it manually; auto HDR does not work. Using HDR helps brighten dark areas of the scene, but it does not compensate enough for overexposed areas. Also, using HDR tends to make the colors a bit warmer.

Like with most phones, the Pure Edition’s slow-motion video is more of a gimmick than a useful feature. The videos contain a significant amount of noise because of the higher video compression, and videos shot in anything but perfect lighting turn out darker than usual because of the shorter exposure time when recording at 120fps. The camera also seems to use CDAF exclusively in this mode, resulting in noticeable focus lag and instances where the camera fails to acquire a focus lock, resulting in mostly blurry videos. Also, there’s no audio track recorded when shooting in slow-motion.