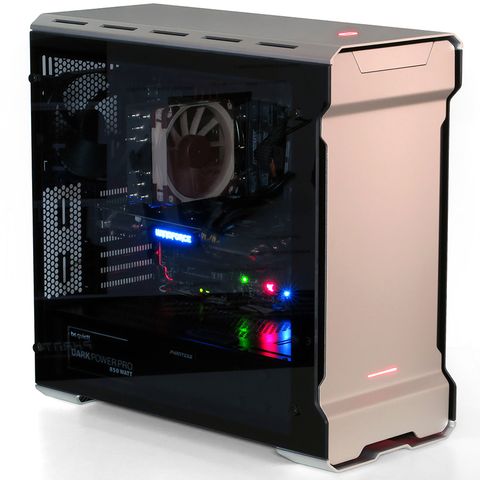 A six-fan hub extends motherboard PWM-based fan control to non-PWM case fans, including any fans added for a liquid cooling radiator. The Enthoo Evolv ATX Tempered Glass manual states that the installation kit includes a pair of fan splitters to support even more fans, but we didn't find one.

A portion of the motherboard tray is angled towards the motherboard's forward edge to make cable management easier through elongated access holes. That same raised portion is responsible for the 10.4" motherboard limit within a case that has space for cards up to 16.5". Forward of that portion, five square plugs fill access holes for add-in SATA drive shelves.

A removable plate on the forward portion of the power supply shroud covers the top of the lower drive bays. Slotted to hold various pumps and mounts, removing it (along with the forward bay brace and trays) opens the front panel to receive 3x 120mm radiators up to 4" thick! Oh, and in case you thought you'd need that particular pump mount, there's another one located beneath the lower drive trays.

Large enough to hold 3x 120mm and 2x 140mm radiators and secured with five chromed screws, the Evolv ATX top-panel radiator tray slides out of the left side.

Though the specifications page says we should have expected a pair of fan splitters standard and would be able to purchase the LED strip separately, we received the LED strip instead of the fan splitters. This appears to be a "reviewers special," and we recommend checking the seller's photos prior to ordering either accessory separately.

The three drive shelves are on the list of included components, along with the pump bracket that I so-carefully laid atop the manual that you may need to stare a few seconds before you see it. Three monochromatic power LEDs are also included (in Red, Blue, and Green), but we're not certain why since the case already has RGB selectable lighting.

Because the Enthoo Evolv ATX Tempered Glass uses a lighting controller powered directly by the power supply, it has no motherboard power LED connection. HDD LED is present, along with the power switch lead, an HD Audio front-panel cable, and a USB 3.0 header cable.

Cushioned pins isolate hard drive vibrations from the lower trays, which also support screwed-on 2.5" drives. I installed one of our 2.5" drives on the back of the motherboard tray instead, using one of the two included 2.5" form-factor trays.

Power LEDs cycle through Green, Blue, Red, and various mixtures of all three colors. The Phanteks LED strip would have brightened the interior far more if desired, but I only wanted to see the lights of the graphics card and motherboard.

Prev Page Specifications, Interior And Exterior Next Page Test Results And Conclusion
45 Comments Comment from the forums
Be In the Know