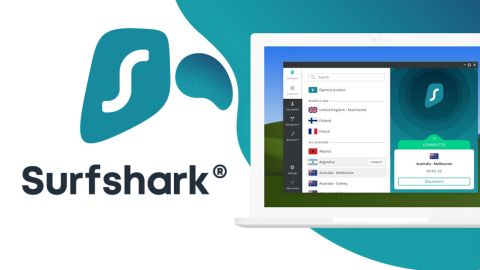 Surfshark is an excellent VPN with some unique features providing additional security and privacy. The icing on the cake is support for unlimited simultaneous connections. But if you’re looking for a VPN to use on a monthly basis, competitors offer more flexible subscription plans.

Based in the British Virgin Islands, the Surfshark VPN service is not as well-known as some of its high-profile rivals. But with an interesting lineup of unique features, it’s worth taking a closer look at, unless you’re looking for something to use on a monthly basis.

The first and the most expensive one is the 1-month plan for $11.95. The second-best is the 1-year subscription, which costs $5.99 per month, while the most cost-effective is the 2-year option at $3.49 monthly. Overall, the service is cheaper than competitor ExpressVPN although IPVanish has the advantage in monthly plans and flexibility.

As of this writing, when visiting the sign-up page for Surfshark for the first time, you’re immediately met with a coupon that reduces the price of the 2-year plan to just $1.99 per month.

In terms of payment methods, Surfshark accepts credit cards, PayPal, Google Pay and even some cryptocurrencies through CoinGate and CoinPayments provider.

To test the service out, you have to sign up for a subscription, since the company doesn’t offer a free trial. However, Surfshark says it can issue a full refund within 30 days of payment, “even if you’re 100% satisfied.”

Surfshark has over 800 servers placed in over 50 countries across the globe. Unlike most other VPN providers, including the more expensive ones, Surfshark puts no limits on the number of devices you can put under its VPN protection simultaneously.

Torrenting and access to geo-restricted services, like Netflix, Hulu, Amazon Prime and BBC iPlayer, are among this VPN’s top qualities. If you also need access to specific services and websites while in countries with strict censorship mechanisms in place, the NoBorders mode makes this easier for you. It provides unlimited access to Facebook, Instagram, VoIP apps and more anywhere in the world.

Surfshark also boasts features most other providers don’t have, such as the MultiHop option, which supports connection to multiple locations at once for additional anonymity.

Another unusual privacy feature is Camouflage mode, used for tricking all potential snoopers and third parties (including even your own ISP) into believing you’re not using a VPN service.

This VPN service can be set up on a wide selection of devices, including Windows, Mac, iOS, Android, Linux, and even smart TVs and some gaming consoles. Chrome and Firefox are covered with Surfshark browser extensions.

In addition to an outstanding blog and help section offering resources and assistance on a wide range of topics, Surfshark also has an excellent customer support team available 24/7. You can contact them by accessing the live chat option in the lower right corner of the website or by filling in the contact form to reach them via email.

Surfshark’s privacy features include all the classics - a kill switch, an AES-256-GCM encryption algorithm, as well as IKEv2/IPSec and OpenVPN protocols.

The kill switch can be activated if there’s an unexpected VPN connection drop, protecting all your sensitive data from outsiders by blocking all internet traffic on your device. It uses two connection protocol combinations: IKEv2/IPSec is available by default, but you can switch to OpenVPN if preferred.

The company also has zero-knowledge DNS on all its servers, which acts as an additional mechanism protecting your privacy. Speaking of DNS, the provider also employs its DNS leak protection technology when using IPv4 stack.

The Whitelister feature basically does what other providers call split-tunneling - it lets you choose which apps and websites can stay on your regular internet connection, while the rest is covered by the VPN.

Surfshark’s no logs policy lists all the usuals - no logging of the IP address, browsing history, connection timestamps, network traffic, session information or the amount of bandwidth used. No one in the company will even know whether you’re using their apps or not. The provider doesn’t hide the fact that it does collect certain, non-sensitive information necessary for the creation of your account, like your email address and encrypted password, basic billing information and order history.

The British Virgin Islands doesn’t have laws requiring organizations to keep any data, which is one less thing to be concerned about with your VPN.

Although Surfshark’s no-logs policy is yet to be fully verified, the security features of Surfshark’s extensions for Chrome and Firefox underwent an audit by Cure53, which it passed with flying colors.

Surfshark’s performance is in line with most VPN providers on the market.

The connection times, download speeds and latencies are within the standard range. During our testing, we experienced no connection failures whatsoever.

Surfshark isn’t as flashy as some other VPN providers but offers a robust security and anonymity platform for all your VPN requirements. It supports unlimited torrenting and access to popular geo-limited services, with some interesting privacy features not seen with its competitors.

While its pricing plans are limited, it’s still cheaper than others, including ExpressVPN, while allowing for more simultaneous connections.

If you’re planning on connecting a lot of devices and are looking to save some cash while doing so, Surfshark is a good fit.