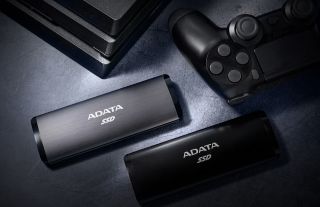 Adata Technology has announced the launch of an all-new portable SSD, the SE760. Built for broad compatibility and high performance, Adata’s SE760 leverages a USB 3.2 Gen 2 interface to perform at speeds of up to 10 GBps. But, not only is it fast, it is sleek, compact, and comes in two colors to choose from.

Adata built the SE760 for those looking for high-speed storage to use on their Mac or Windows PC as well as various other devices. With its USB-C connector, it is compatible with almost any USB-compatible device. Smartphones, tablets, consoles, and more.

The drive comes in three capacities to suite the mainstream: 256GB, 512GB, and 1TB. Adata’s SE760 is powered by 3D NAND flash. Each capacity is rated to perform at read speeds of up to 1 GBps, meaning you can read a 10GB file in just 10 seconds, but while read performance is guaranteed to be fast, the SKUs lack official write speed ratings. Adata backs the SE760 with a 3-year warranty.

The SE760 looks sleek and tough, too. There are two color options: black and Titanium Gray. With a hairline-brushed metal shell, it can take a drop or two and keep on going. Overall, it measures 122.2 x 44 x 14 mm (L x W x H) and weighs just 95 g, making it quite compact and portable. It even has a power indicator light, which is something many portable SSDs lack.

While launched, exact availability and pricing will vary by region, however. It should be hitting stores soon, so be on the lookout.