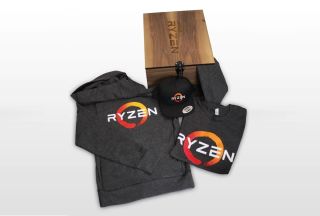 AMD has been doing great with its hardware over the last few years, and Lisa Su is bringing the company to excellent profitability. With the company taking pride in those achievements, it has reopened the AMD Fan Store with merchandise branded with Ryzen, Epyc, and Radeon logos, as spotted by HardwareLuxx.

For the time being, the 'featured' merchandise is limited to only four choices of items -- an Epyc branded t-shirt, Ryzen Threadripper hoodie, a Radeon baseball cap, and a 'limited edition' Ryzen Box set.

Don't let that fool you, though. Click through on some of the items, and you'll find more items, so you're not limited to the $150 limited edition box set if you want some non-Threadripper Ryzen branded gear.

Nevertheless, although it is quite pricey, the box set does come with a Ryzen hoodie, Ryzen t-shirt, Ryzen cap, all packaged into a wooden AMD Ryzen box.