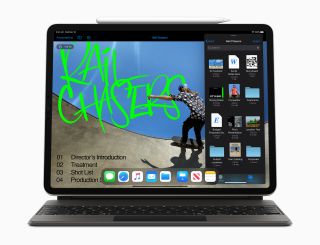 Apple has updated its iPad Pro line with its new iPad Pro, which comes with a host of new upgrades including the 8-core A12Z Bionic processor and trackpad support in iPadOS.

The new iPad Pro is coming in 11-inch and 12.9-inch version, with the basic version packing 128 GB of flash storage. For those craving more, capacities will range all the way up to 1 TB, which is huge for a tablet. Naturally, the usual WiFi-only variants will exist alongside the WiFi + cellular data models.

Under the hood, the iPad Pro comes with the new A12Z Bionic chip, which Apple claims makes it faster than most Windows laptops. This new silicon comes with eight CPU cores, along with a Neural Engine. Apple claims to be powerful enough to handle 4K video editing and designing 3D models.

One of the biggest changes coming along with the new iPadOS 13.4 is the addition of trackpad support, which is what enables the new keyboard. The new Magic Keyboard has a trackpad built-in, and will 'float' the iPad Pro above it, presumably to keep it in balance, as a common problem with tablet keyboards is their tendency to fall backwards.

Other new features include a wide-angle camera, "studio-quality mics", along with a LiDAR scanner for improved photography. The new Pro Display comes with wide DCI-P3 color support and a 120 Hz refresh rate.

Apple is claiming that battery life is set to last up to 10 hours.