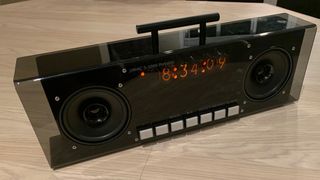 Boomboxes are outdated, and even alarm clocks are facing heavy competition from smartphones. But this alarm clock, better known as the Ultimate Nixie Internet Alarm Clock (UNIAC), puts a modern tech twist on more classic technology. Recently shared online by a maker who goes by TheJBW, it's a Raspberry Pi-powered boombox and working alarm clock that can stream music over Wi-Fi from Spotify. Keeping things retro, Nixie tubes also display the current time.

In an effort to give the music a visual component, the maker included two IN-13 VU meters that fluctuate to the track's left and right channels. According to TheJBW, UNIAC also uses a robot voice to announce information that can't be displayed on the Nixie tubes.

The UNIAC features a motherboard small enough to meet the form factor of a boombox. The main brain of the operation is a Raspberry Pi Zero. The Pi Zero provides wireless support, making it possible to stream music from Spotify using Mopidy, a Python-based media player.

The Raspberry Pi project also called for a few additional components, including an Adafruit Class D Amplifier board for sound and a Teensy 3.2 as a CPU for the Nixie display module.

You can follow TheJBW on Reddit for more project updates. There are a couple of changes already planned, including a new battery/power solution. You can find a full write-up with more project details on his website, EequalSpi.