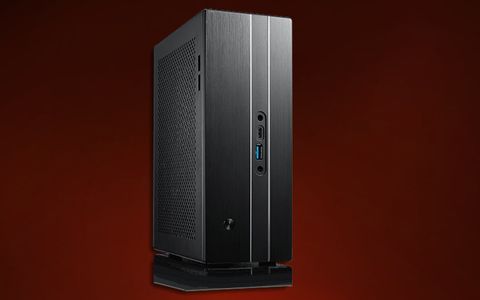 The ASRock Deskmini GTX Z370 is the ultimate barebones mini PC for enthusiasts that enjoy building their own PCs.

ASRock updated its Deskmini barebones mini PCs to a Z370 platform, and it’s one of the most capable and versatile systems of its kind. The Deskmini is the ultimate enthusiast mini PC with support for 8th generation (Coffee Lake) Intel desktop processors, options for GTX 1060 (in Taiwan) or GTX 1080 (in the United States) graphics, and more total storage drive capacity than any other mini PC we’ve ever seen. The GTX 1080 version sold in the U.S. will run for $1,529.99, while the GTX 1060 model we tested is around $900 USD (if you go by Taiwanese pricing). The new Z370 Deskmini is worth every penny if you need a seriously small form factor and like to build your own PC.

The ASRock Deskmini Z370 GTX isn’t designed to attract the eye - it could easily hide behind your attached display with its petite 213 x 154.5 x 81.9mm chassis. You certainly wouldn’t expect something this small to house a motherboard capable of supporting desktop processors and GTX 1060 or 1080 graphics, and the black steel and aluminum construction gives the tiny wonder a sturdy base and a clean, sleek look.

You could place the Deskmini horizontally, but the left, right, and top panels are all ventilated, and I preferred to leave them exposed by setting the PC upright. This gives the components inside considerable airflow and in theory, better cooling capability (which is critical at this small size). However, you have to start assembling the barebones PC before you even open the case - the rubber feet at the bottom panel that stabilize the upright chassis need to be peeled and attached (you’ll see the grooves where they go in each corner) before you place it anywhere.

The front panel features a black brushed aluminum finish with two off-center silver inlays that span from the top to the bottom of the device. The ports on the front panel are centered in between the two stripes and consist of  a USB 3.1 Gen 1 Type-C port and a Type-A port, as well as two audio jacks (one mic-in, one headphone-out/mic-in combo). The left side panel’s edge also has two USB 2.0 ports  that use a header on the motherboard.

The back panel doesn’t offer much more USB connectivity, with only four USB 3.1 Gen 1 Type-A ports. But the Deskmini can connect multiple displays via and HDMI 2.0, DisplayPort 1.4 and a mini-DisplayPort from the GPU or an HDMI 2.0 port on the motherboard.

As a barebones device, the ASRock Deskmini comes without a CPU, memory, storage or an operating system, so you’ll have to buy and install your own. To get to the components, you’ll have to remove the four Phillips-head screws at the back edge on the top and right side (two on each side) and slide the ventilated aluminum panel away from the front. The Deskmini’s Z370M-STX micro STX motherboard comes with a GPU (GTX 1060 or GTX 1080) pre-installed with a custom air cooler attached to the MXM card (this is much more commonly found in laptops). However, the board is also available by itself sans graphics.

You can access the Z370 motherboard’s LGA 1151 CPU socket and two DDR4 memory SODIMM slots without any further disassembly, but you’ll have to remove two screws (one on each side of the motherboard), unplug the front panel I/O cables and slide the board away from the front panel to get to the storage and Wi-Fi interfaces on the other side.

The opposite side of the device hides an impressive amount of storage interfaces. There’s a total of four M.2 slots - one for a Key-E WiFi module (which is included but not preinstalled) and three for 2280-sized storage devices. Two of the three M.2 slots support PCIe 3.0 and SATA 6GB/s drives, and the bottom (three-lane) interface can be equipped with a PCIe 3.0 x4 SSD or an Intel Optane memory module if you want to use the Z370 chipset to cache a secondary 2.5-inch HDD (why make a boot volume from an Optane-cached HDD with all that M.2 space?). Speaking of which, you can fit two 2.5-inch drives above the M.2 storage.

The ASRock Deskmini is shipped with a driver disk that also features RGB LED control software for the motherboard’s 4-pin RGB header, which helps if you want to install a flashy LED strip (not included) to illuminate the interior components. Since you have to install the operating system yourself, bloatware is not a factor.

ASRock provides a plethora of hardware to install your M.2 and 2.5-inch storage devices and Wi-Fi module (included). This includes two SATA power and data cables and the Wi-Fi antenna cables, both of which you need to install and run yourself. The antenna mounts can be installed by punching out two of the perforated holes at the back panel of the chassis, and the two 2.5-inch drives are attached with a combination of notches and screws.