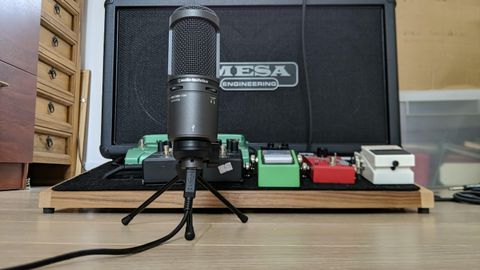 Although it falls just shy of Beyerdynamic's Fox for outright recording quality, this is still an incredible mic for relatively little outlay. At home in streaming, podcasting or music recording environments, it's a studio mic with the ease of a USB plugin.

With respect to the Blue Yeti, its era of desktop mic dominance is starting to draw to a close. The USB mic market has gathered real momentum in the past year or so, and the spec sheets of newer models are increasingly blurring the line between enthusiast USB models and studio equipment that has traditionally carried a much higher price tag. That's been helped along by manufacturers such as Beyerdynamic and Audio-Technica bringing their own USB offerings to market, bringing along decades of studio know-how with them as they do.

But if you're a streamer, gamer, or podcast creator, how much do you really need from your mic? And how much is just there to pad the specs sheets? Well, in the Audio-Technica AT2020USB+'s case, it takes its cues from seminal early noughties pop-punk album All Killer No Filler, from Sum 41, while delivering tones that are definitely easier on the ear than Deryck Whibley's vocal performances. That is to say, this is a well-put-together package that comprises everything you might reasonably need for recording vocals or instruments in a streaming or home recording setup. Nearly everything, at least: There's no pop shield included with the AT2020USB+, even in the more expensive podcasting pack bundle, which also includes a pair of headphones and a boom arm. That's not a deal-breaker, though, since pop shields are at least cheap to buy separately.

Priced at £120/$150 at time of review (or $199 for the podcasting pack), the AT2020USB+ slots into a bustling market where the Blue Yeti, Razer Seiren, HyperX Quadcast and our personal favorite, the Beyerdynamic Fox, already reside. What's more, it's got some skin in the game; the first version (sans '+') was released in 2017 with a slightly more modest spec sheet and a lack of headphone monitoring, so what this latest model represents is a refinement of a mic that already garnered a decent reputation.

And were it not just slightly outperformed by the Fox on the spec sheet and the ear test, that reputation would be that of the best on the market. As it stands, it's a highly competitive alternative to the Fox.

Like most USB mics that enter our offices, the aesthetic of this Audio-Technica model owes more to the studio than it does to gaming peripherals. Frankly we couldn't be happier about that. The last thing we want when we're recording is a dizzying array of RGB lights putting us off whatever we were about to say or play.

The desktop stand adopts a tripod design, similar to those you'd use with a kick drum mic like AKG's D112. It might look a little bit fragile, but the locking tripod arms are stable in practice so you need not worry about the mic taking an unexpected tumble midway through your WWE podcast. It's slightly fiddly to adjust and balance though, due to the number of hinges and screws involved - we prefer the simpler options presented by Razer and Beyerdynamic in which a great big slab of metal forms the base stand.

On the mic itself are gain and volume controls, along with a headphone monitoring input and a monitoring level adjust, all fitted around the middle of the USB microphone via thumb wheels. Within the AT2020USB+ (couldn’t someone think of a better name?), a small blue led turns on to let you know it's getting power via USB, the connector for which is at the very base of the device. There's also an adapter for boom arms, and a generously padded leather carry case which looks suitably "pro." Bust it out near someone reading Sound On Sound magazine and watch their gaze be drawn to it like a moth to a flame.

Similar in size to other mics we've tested recently like the Beyerdynamic Fox, it's unobtrusive enough to fit between your keyboard and monitor in a gaming setup, and the tripod lifts it high enough off the ground to nestle in close to a speaker cabinet for recording music.

This is a medium-diaphragm condenser with just a cardioid polar pattern available, so It's designed as an all-rounder, and performs wonderfully as such. When recording spoken vocals, it has a warmth and clarity when you're right up to the diaphragm, and doesn't start to sound roomy until you're about four feet away. With a 44KHz sample rate and 16-bit depth, it falls in line with the specs of most other mics on the market, offering CD-quality audio as the audio signal is converted to digital.

What we loved about the Beyerdynamic Fox when we tested it recently was its higher bit depth and sample rate, which gave it a warmth and subtlety and placed it in line with higher-priced studio mics. In all honesty, despite offering only CD-quality audio, this mic doesn't fall too far behind. It's robust enough to record booming guitar signals through a 2x12 cabinet without distortion even at ear-rattling volume, but also capable of capturing those transient details of a softly delivered vocal up close to the mic.

There are only two drawbacks in fact, and they're slight. One is that the cardioid pattern is broad enough that you have to put some time and effort into positioning it at just the right angle to avoid the dreaded keyboard clicking sounds. This isn't really a failing on the AT2020USB+'s part, but perhaps more of a by-product of its proclivity to capture some room noise, which actually enlivens a lot of vocal and acoustic guitar recordings. You could always --shudder -- use a quieter membrane keyboard if this bothers you.

The second issue is a slightly insubstantial low end which we're not sure what element to pin the blame on for. It might be a function of the analog-to-digital conversion, since there's no reason a mid-sized diaphragm like this one shouldn't be able to capture some authoritative bass frequencies. We are talking slight, though. It's the kind of thing you notice while listening to wav files of different microphone recordings specifically to hear their differences, not during everyday use.

The headphone preamp for latency-free monitoring is quite capable at high volumes too without breakup creeping in. This might not be a big selling point for the typical streaming setup, but if you are looking to capture some musical performances in which tracks need to sync up to a metronome, or just with each other, it's a definite plus. The breakup on the Beyerdynamic Fox's headphone preamp was the only real chink in its armor, so Audio-Technica wins back some ground on its rival with that one.

It's a generous package overall that the AT2020USB+ arrives in. We're big fans of the carry-case and its frankly ludicrous levels of padding beneath a smart leather exterior, and the tripod stand works well once you have everything tightened and balanced just as you need it. We'd have liked to see a braided cable included for the USB connection to avoid knots and tangles down the line, though.

Plaudits are won for the boom mic adapter, and for the sensibly laid out thumb wheels on the mic itself. There are only so many accessories a microphone needs to shower you with, and save for that aforementioned pop shield the AT2020USB+ puts ticks in boxes.

This being a class-compliant device, you can expect both Windows and MacOS devices to recognize and start using the mic without the need for specific drivers. That's especially handy if you're on the road and looking for a very literal plug-and-play solution, and it's also nice to avoid the bloatware that sometimes creeps into your systems with the addition of a new mouse, keyboard, or headset. It's only a matter of time, we suppose, before someone offers some bundled software suite that changes your voice into that of Terry Crews or a Minion. Until that day comes, we'll enjoy the extra drive storage space.

There's very little to find fault with here. Audio-Technica's streaming- and podcasting-friendly AT2020USB+ is built with the same sturdiness and quality you'd find in its studio mics, with a USB interface and tripod stand that makes for an easy streaming setup. If you regularly stream or record podcasts as a duo, a mic with a bidirectional polar pattern like HyperX's Quadcast might be more suitable, but for solo recording this model's a dream.

Scrub through the recordings and you can hear a slight absence of chunky, powerful low end compared with our current favorite Fox from Beyerdynamic. But what the AT2020USB+ lacks -- just narrowly -- in overall tone, it gains back in the clarity and headroom of its monitoring via the headphone input. This is a mighty contender for anyone looking to do more with their USB mic than the odd stream.