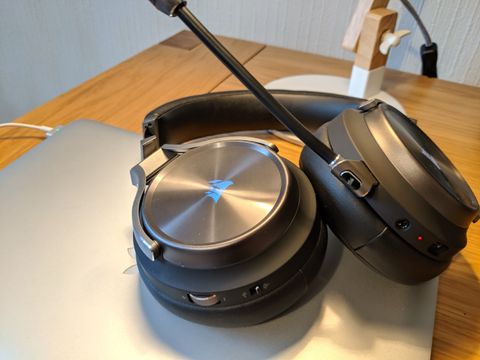 Save for a couple of minor issues, this is one of the strongest and most attractive wireless headset packages to arrive in a while.

Corsair’s last few headset releases have offered tantalizing low-cost value gaming headsets to thrifty gamers, (such as the Corsair HS35). They were largely successful, too, offering a construction quality standard typical of the California-based manufacturer. But as the fantastically ostentatious naming of this new Virtuoso headset line suggests, it’s not making any compromises this time.

Competing with the best gaming headsets, this is resolutely a high-end offering, with a maximalist spec sheet and a beautiful aesthetic that seems disconnected from the adolescent stylings of most gaming peripherals. It’s almost as though it’s visiting from the audiophile market to remind gamers how high the ceiling goes when it comes to headphones.

It’s priced higher, then, than the recent HS35 and HS70 headsets, but considering what’s on offer here it still seems very reasonable. £150/$180 buys you a Virtuoso RGB Wireless model, and $210/£180 gets you the Virtuoso RGB Wireless SE, which we’re examining in this review. Certainly high-end, but with Steelseries’ Arctis Pro wireless going for $50 more and Razer’s Nari Ultimate carrying an extra $10-$20 on its pricetag at most retailers, it’s still very competitive.

The headset itself comes with -- don’t laugh -- the best travel case I've ever seen for a gaming headset, along with a premium braided USB-C charge cable, a 3.5mm adapter cable, the wireless receiver dongle and the detachable mic. Seriously, there’s a magnetic clasp on that travel case and everything. It’s nuts.

Onto the headset itself. Departing from the void aesthetic entirely and carrying very little over from the HS series, the Virtuoso’s a notable departure from older Corsair models. And I love the new look. The SE variant is finished in a combination of gunmetal-tinged aluminum, matte rubberized plastic around the outer edge of each earcup and immaculately stitched leatherette covering the padded headband and contact pads. The aluminum headband has 10 adjustment steps, marked by little ruler inlays on the band itself. There are subtle Corsair text logos inlaid onto the bottom of the headband on each side.

A pair of very flash hinges, finished in a combination of matte and polished metal, connect the headband to the earpieces, which can be rotated to lay the headset out flat for travel or storage. The adjustment’s pretty much silent -- not even the faintest creak.

Right in the middle of each circular brushed metal earcup exterior is an RGB-lit Corsair logo, achieved through tiny, precise perforations in the metal cover. This humble reviewer hasn’t seen RGB lighting implemented in this way before, and, frankly, it’s very impressive. Even someone not usually into gaudy lighting can see the aesthetic appeal here, and you can always turn it off in Corsair’s CUE software anyway if you don’t like it.

On the rear-right of the headset is a power switch and textured metal volume scroll, while the left-hand earcup holds all the inputs: USB-C charging, 3.5mm right at the bottom and a one-way mic input, notched so that you can’t slam it in the wrong way round. There's a volume control on the right earcup. The earcup's luxury encompasses every detail, from the weighting of the scroll wheel to the finishing on the power switch. Deep, unusually soft memory foam pads finish the job off around the leatherette contact pads.

That all sounds very decadent, and it is. This is the most impressively built and finished headset I've seen in a very long time, and would easily look just as at home or in a plane, a train seat, or around your neck in the street as it would in a gaming environment.

However, it’s not the most comfortable headset I've ever tested. The problem doesn’t seem to be weight, since it tops the scales at a pretty sprightly 0.8 pounds. More likely it’s the padding material on the headband underside and perhaps the shape of the headband too, but the end result is a tangible imprint on the top of your head after more than an hour’s use.

That’s really frustrating because in all other aspects the Virtuoso’s comfortable for much longer -- there’s no digging in on or around the ears, and although leatherette earcups tend to get sweaty I had no such issues with these.

The big feature term of audio here is hi-res capability, evident in its 10Hz-40KHz frequency response. The actual number of hi-res audio sources remains scarce in 2019, as it did when we first started to see headsets boasting this feature several years ago. Music streaming service Tidal offers FLAC streaming and some games feature high definition sound packs(you’ll know them by their enormous download size), but generally you really have to go out and find audio sources that go beyond CD-quality, 44.1KHz 16-bit sound.

But the good news is that even if you are listening to predominantly CD-quality audio or even compressed MP3s, the benefits of a hi-res capable headset shine through.

There definitely is some hardwired EQ going on - this is a gaming headset rather than studio cans, after all - so as you’d expect, the Virtuoso is at its best in-game. Our review sample’s arrival happened to coincide with a glut of loud, bombastic titles, like Borderlands 3 and my annual replaying of Star Trek Voyager: Elite Force. In those gun-centric environments the rumble of grenades and weapons feels tangible, not just audible, but dialogue isn’t buried beneath the mud as it can so easily be by other headsets.

In a musical environment, the Virtuoso remains impressive. Fans of powerful bass would prefer the monstrous low-end response from the Audio-Technica’s ATH-G1, while those of a flatter disposition would pick out Steelseries’ Pro Wireless for its brilliant articulation. The Virtuoso is very much in the highest echelon of gaming headsets, but by striking a middle ground between the two aforementioned extremes, it doesn’t surpass either of those headsets. Still, it’s a wonderful headset for sitting back with and letting Dark Side of the Moon flow over you, on point when tight percussive hits arise and rumbling ominously in the lower synth notes and bass riffs.

Corsair’s rolling out a new wireless tech with these cans called Slipstream, and it boasts 60-foot range on the spec sheet, alongside ultra-low latency. I did experience dropout before the 60 foot mark; although, your own mileage may vary as it mostly depends on the number of walls you pass by, and the construction materials used in the property. That said, it’s still ample for gaming on consoles when your dongle sits under the TV at the other side of the room.

The Virtuoso also boasts 20 hours of battery life, and that one held up in practice. It’s also quick to charge, thanks to the USB-C connection.

Continuing a theme of attention to detail and all-round excellence, the Virtuoso’s detachable mic is among the best I've sampled from gaming headsets. It’s supremely malleable and features a mute switch at the base, which turns the light around the edge of the mic chamber from green to red when muted.

Corsair’s Virtuoso RGB Wireless SE has blown me away with its attention to detail and a design approach that manages to cram premium touches into almost every facet of its figure. It’s a fantastic looking headset, sounds powerful in gaming environments and lives up to its 20-hour battery life.

I do have some reservations in regards to that headband being perhaps a touch to tight after an hour’s use, but that aside, there are just so many good reasons to make this your go-to headset, regardless of cost, it’s hard not to recommend it.