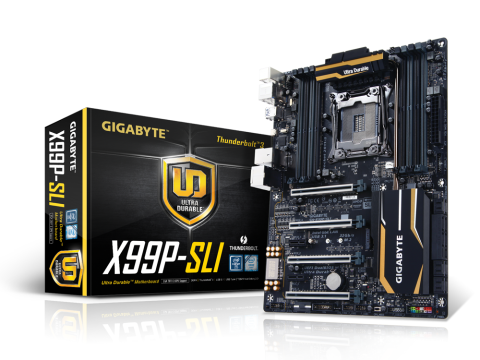 A well-made board for those requiring Thunderbolt 3 and it has impressive RAM capabilities, but better and cheaper options are available for those needing a more general purpose motherboard.

One large irony of Intel's High End Desktop (HEDT) line is the relatively slow adoption rate of new technologies and connectivity. Whereas the company's mainstream desktop segment gets updated or refreshed nearly every year, the HEDT goes three years between revisions. If mainstream motherboards don't have more stock integrated features than their HEDT counterparts, they usually get new features sooner.

One area where both segments seem lacking is Thunderbolt adoption. While Intel is working on bringing Thunderbolt into its future CPUs, it's still a relatively rare add-on right now. To this end, Gigabyte has updated its X99-SLI board with an Alpine Ridge controller, adding official Thunderbolt 3 functionality to its X99 portfolio. Let's see if it hits the mark.

The X99P bears Gigabyte's "Ultra Durable" mark, meaning a heavier 1.7mm PCB and robust power management circuits. Though it only has a 6-phase VRM, it has no problem feeding a power-hungry, overclocked i7-6950X. The CPU socket has extra power supply and ground pins designed specifically for feeding extra power to the CPU when necessary. The extra pins, power regulation, and accompanying UEFI settings are enabled by a switch at the bottom of the board. This seems a bit unnecessary for Broadwell-E CPUs as they are already thermally bound, though Haswell-E users might appreciate it. Further proof the X99P takes power regulation seriously is the 5mm heat pipe running between the voltage regulator heatsink and the much larger one over the chipset itself, giving a much larger effective surface area for cooling the regulators. I'm almost surprised to find only an 8-pin EPS plug instead of an 8+4 system.

To cool the rest of the board and components, the X99P hosts five 4-pin fan headers—four spread out by the corners and one just below the CPU socket. Unfortunately, fan operation is less than ideal. The CPU cooler-specific header is close enough to the socket that larger, overhanging air coolers will make it difficult to connect the fan once you've attached it to the cooler. It's also the only header to support PWM fan control. The others are left with only a two point voltage control curve, covered in more detail in the Firmware section.

The expansion cards are much more sensibly configured. Four steel-wrapped 3.0 x16 length slots take up the first, third, fifth, and seventh positions allowing enough spacing for dual-slot coolers on all GPUs. Two 2.0 x1 slots tied to the PCH are also in the fourth and sixth positions. The wiring is also simple, yet effective. The first and third slot are wired for full 16 lanes while the other two can only support half as many. Each 8-lane slot is wired to borrow lanes from the one above it. For two GPUs, by far the most common multi-graphics setup, this layout gives two slots of spacing for air circulation between the cards.

With a 40-lane CPU, this means x16/x0/x16/x0, x16/x0/x8/x8, and x8/x8/x8/x8 splits, fully supporting 4-way SLI and Crossfire. Under a 28-lane CPU, the secondary slot drops to only eight lanes, resulting in x16/x0/x8/x0, x8/x8/x8/x0, and x8/x8/x4/x4 splits, so no 4-way SLI in this configuration. An auxiliary 4-pin Molex connector at the bottom of the board, facing downward, provides extra power to the PCIe slots when using multiple graphics cards. Surprisingly, for a motherboard that supports 4-way graphics, the box contains only a single flexible SLI bridge.

For storage, the X99P has the regular 10 SATA 6Gb/s ports all along the front edge and forward facing. Integrated RAID support is only on the first six, as expected, and ports 5 and 6 are also tied to a single SATA Express port. The X99P also sports a full 3.0 x4 M.2 slot, seemingly a rarity on Gigabyte boards, as most products in the company's X99 stable are limited to PCIe 2.0 signaling. Unfortunately, the manual doesn't give any detail on its operational limits and Gigabyte didn't explain when we  asked. The X99P never diverts more than 32 lanes to the graphics, so the M.2 must be able to function at 3.0 x4 at all times with a 40-lane CPU. A 28-lane CPU devotes up to 24 lanes to graphics, leaving only four left for the M.2 and Thunderbolt to share. The M.2 slot can fit up to 80cm modules and is wisely in the fourth expansion card position, out of the way of GPU waste heat even when using two GPUs.

The Thunderbolt 3 is of course the signature feature on the board. Using Intel's Alpine Ridge controller, the X99P routes four PCIe lanes from the CPU to the lone type-C port on the rear I/O. Complementing Thunderbolt is a DisplayPort input on the back, allowing you to route a discrete GPU's output to that of the Thunderbolt.

Other peripheral interfaces on the back include one PS/2 jack and four USB 2.0 ports. Three USB 3.0 ports are available for high speed devices, and the Thunderbolt connector doubles as USB 3.1 (along with the red type-A port next to it). The Thunderbolt port does not provide any special power delivery, however. Networking is handled by an Intel GbE controller and audio uses Realtek's ALC1150 codec with the typical five 3.5mm analog outputs and one optical S/PDIF. Like other manufacturers, Gigabyte separates the audio circuitry on the board from other components to prevent EM interference (there's a lighting strip on the board to highlight the divide). Gigabyte boasts it has done even better than usual by separating right and left channels onto separate PCB layers.

Other internal connections include two USB 2.0 headers, TPM, HD audio, front panel junction, and two USB 3.0 headers. All are along the bottom edge save for one USB 3.0 header on the front just above the first PCIe slot. Gigabyte continues its excellent tradition of clearly labeling the internal headers, particularly color-coding the front panel box. Experienced system builders don't strictly need such labels, but they do slightly speed up identification and cable routing plans. Strangely missing, however, is any kind of error debug display.

The instruction manual included with the board could be more detailed, specifically in explaining PCIe sharing between the card slots, M.2, Thunderbolt, and chipset. Four SATA cables are also in the box (two straight connectors and two angled), along with a quick installation guide, the single SLI bridge already mentioned, and, oddly enough, a Crossfire bridge. Gigabyte even throws in two short DisplayPort cables (one DP to DP, the other miniDP to DP) to hook your GPU up to the DisplayPort pass-through connector on the motherboard. Finally, the rear I/O shield is well labeled and padded.