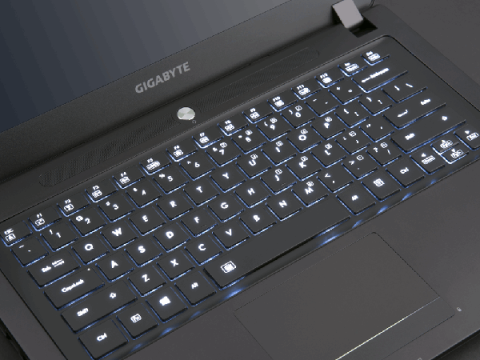 When you see the P34W v3, you won’t believe it features a fast quad-core processor and high-end mobile GPU (Nvidia’s GM204, no less). And yet, the compact system blasts through today’s most demanding games at its panel’s native FHD resolution. This laptop isn’t at all quiet when it’s asked to work hard; invest in a nice headset, though, and the acoustics won’t bother you as much.

Gaming laptops are inherently exercises in compromise. You can emphasize the gaming aspect by cramming lots of fast hardware into a big, heavy chassis. Or you can focus on mobility, cutting power and cooling to make the machine more portable. Everything in between represents a rebalancing act to attract customers with different priorities.

When Gigabyte’s P34W v3 first landed in our lab, we thought there was no way it’d game competently. Measuring just under 13.5” wide, less than 9.5” deep and roughly three-quarters of an inch thick, it easily fits in a backpack. Without its bundled power adapter, the P34W weighs just four pounds. By all accounts, the platform is thin and light—two adjectives rarely associated with gaming.

And yet, our sample includes a Haswell-based Core i7-4720HQ host processor, 16GB of DDR3-1600 in a dual-channel configuration, Nvidia’s GeForce GTX 970M with 3GB of GDDR5, a 128GB SSD and a 1TB hard drive. Knowing what we know about quad-core i7s and the GM204 GPU, it’d be reasonable to expect playable frame rates in demanding AAA titles at the 14” panel’s native 1920x1080 resolution.

Surely, then, the P34W v3 must cost a mint, right? Not really, no. You can customize the notebook on xoticpc.com to look like ours for just under $1700. Or, Amazon has a similar model with 8GB of RAM for less than $1600. That's quite a bit less expensive than Razer's 14" Blade.

Gigabyte does lose points when it comes to what you hear from the P34W v3—both through the sound you get through its anemic stereo speakers and the fan noise that escapes as a byproduct of its powerful hardware. Even with no load applied, expect the cooling subsystem to spin up to noticeable volume sporadically. More on that later, though.

There are a few different part numbers listed for this notebook. One, the P34Wv3-CF2, includes 8GB of DDR3, a 128GB SSD, a 1TB hard drive and Windows 8.1. Another, the P34Wv3-CF3, boasts 16GB of DDR3, a 256GB SSD, the same terabyte-class disk and Windows 7 pre-loaded with a Windows 8.1 upgrade. Those are both on Newegg. Other vendors market this system as the P34W v3 and then allow you to customize it to suit. The box containing our sample didn’t list any specifications or model numbers, so you’ll want to pay particular attention when it comes to comparing parts and price tags.

Next Page Technical Specifications
21 Comments Comment from the forums