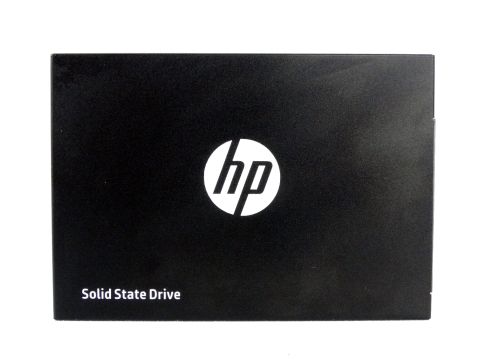 Low application performance combined with a higher-than-EVO price doesn't make for a good combination in this climate. Companies don't have to win both categories, but people want the best value. That comes from a successful mix of both. The S700 Pro 256GB is close, but still a little off target.

When it comes to brand recognition, few technology companies are in the same league as Hewlett-Packard. The company started out in a Palo Alto garage with two men making electronic test equipment. Through most of the 2000s, HP was the world's leading PC manufacturer, and it made it without a cow theme or a "dude" actor.

In the modern era, HP has a successful flash product that scales from the 3par all-flash server line to more mainstream 2.5-inch consumer SSDs. The company licenses its name so other manufacturers can build products with the label, but every new device must pass through HP's rigorous internal qualification testing before coming to market.

Over the years, we've seen PNY and Biwin build HP-branded SSD products. The SSDs sell online and in retail stores but largely go unnoticed by the enthusiast community, until now. A distributor for HP-branded SSDs contacted us and offered the new S700 Pro 2.5" for testing. This series uses cutting-edge technology that goes head-to-head with many of the products we test on a regular basis. An HP-branded SMI SM2258 controller is at the heart of the S700 Pro, just like we see in many other mainstream SSDs. It also comes packed with Micron's 384Gbit 3D TLC NAND. However, the S700 Pro employs HP-tuned firmware, and that makes all of the difference. Just as important as the performance, the S700 Pro comes to market with competitive price points.

The HP S700 Pro uses a familiar combination of components with an unusual firmware that does a really good job of maintaining a high level of performance. HP chose the SMI SM2258 controller that we've tested a number of times; its one of the most popular SSD controllers available. The controller features advanced Low-Density Parity Check (LDPC) error correction to increase the endurance of Micron's 384Gbit 3D TLC die.

Sequential throughput reaches as high as 565/520 MB/s read/write for the high-capacity model, and throughput only drops a little through the range. The lowest capacity 128GB model writes sequential data at 460 MB/s. The write specifications only measure SLC buffer performance and not native TLC throughput. We see more random read performance variation between the high- and low- capacity models than the sequential performance. We found a range of 40,000 random read IOPS (128GB model) to 85,000 IOPS (512GB model). Random write performance stays relatively tight, between 85,000 and 90,000 IOPS, but these numbers also reflect SLC buffer performance.

Don't let the footnotes discourage you. The HP S700 Pro uses a high-performance firmware that we haven't found on any other SM2258-equipped drive with Micron flash. I'm certain many of our readers will be surprised with the S700 Pro's performance.

HP backs the S700 Pro with a three-year warranty that has an endurance limit of .5 Drive Writes Per Day (DWPD). As you would expect, the HP warranty includes an 800 number for support and claims.

The HP S700 Pro ships in a retail-friendly package that we should see on store shelves at some point. The drive just came to market and hasn't worked through the supply chain yet. Only a few online retailers list this model, but that will soon change.

In typical HP style, there isn't much to look at on the outside of this SSD. You won't find any RGB blinkies or racing stripes. On the surface, the S700 Pro looks like a typical business-class SSD.

Under the hood, we found eight NAND packages armed with Micron 384Gbit TLC die using first-generation IMFT 3D technology. There is a single NANYA DRAM package that feeds an HP-branded SMI SM2258 controller. The black PCB is a nice touch, but most users will never see it.

HP places a thermal pad between the SM2258 controller and the chassis to wick heat away from the 4-channel controller.