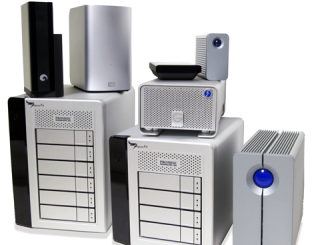 Delivering up to 1 GB/s data of throughput and the ability to communicate over PCI Express externally, it's no surprise that Thunderbolt has the attention of enthusiasts today. Those same savvy buyers see that the technology still bears a prohibitively high price premium, though, and decry its lack of value. If you aren't yet familiar with Thunderbolt and want a low-level lesson on it, check out Everything You Need To Know About Thunderbolt.

Nevertheless, several Thunderbolt-based external storage solutions are now available with the potential to nearly double the peak performance of today's most popular interfaces. The question is: are vendors able to populate these enclosures with the right hardware to enable blazing-fast transfers?

We certainly understand if you're reluctant to spend extra money on a new and unproven connectivity standard that looks like it's being set up to replace USB. But take solace in Intel's insistence (for now) that Thunderbolt is meant to complement USB 3.0 and not replace it. Although the two interfaces appear at odds, they're decidedly ideal in very different ways and for equally disparate applications.

USB 3.0 does, for example, enable impressive performance across a bus rated for 5 Gb/s. However, its inefficiencies knock what, on paper, appears to be a 500 MB/s interface down far below that theoretical maximum. As an interface for storage, Thunderbolt's 10 Gb/s (1 GB/s) peak has no trouble nudging USB 3.0 from its pole position.

It's perhaps more accurate to think of Thunderbolt as the spiritual successor to the FireWire standard, aimed at users with high-end applications unable to compromise performance—and willing to pay top dollar for it.

And like FireWire 800, which was exorbitantly-priced when it debuted, today's Thunderbolt-based adapters cost more than $150 and require expensive cabling that isn't included. Intel says that it's committed to bringing down the cost of second-generation Thunderbolt controllers and cables, hopefully allowing the technology to dangle within reach of value-conscious customers sooner rather than later.

A large number of Thunderbolt-related product announcements at this year's Computex give us some indication that a flood of products should be emerging soon. But there are already dozens of Thunderbolt-based storage devices available. We gathered up nine and put them to the test.