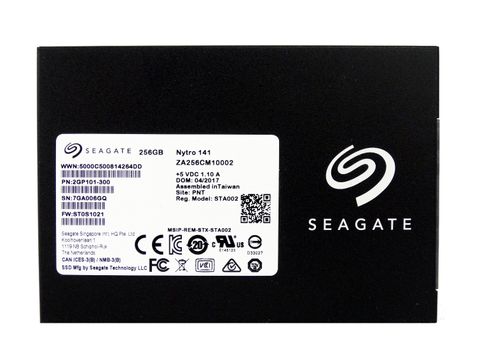 We broke out the low-cost SSDs to compare to the Nytro 141 SSD. You know the script for the class-leading Samsung 850 EVO 250GB. This drive has become increasingly more difficult to find as Samsung winds down production of the 32-layer V-NAND that made it possible, but Newegg still sells the EVO 250 for $105.19.

The Mushkin Triactor and SanDisk Ultra II are older designs that still enjoy brisk sales. The Plextor S3 series just came to market in July. The S3C model is the 2.5-inch model, and the S3G is the M.2 2280 version with the same SM2254 controller and Sk Hynix 14nm TLC NAND.

All modern SSDs deliver high sequential read performance regardless of the type of NAND they use. The Seagate Nytro 141 256GB stands out from the pack as it pushes the upper limits of the SATA 6Gb/s interface with nearly 560MB/s of throughput at QD2.

We see much more variation during sequential write workloads. The Nytro 141 uses a direct-to-die write technique after the SLC buffer fills, so performance doesn't drop to sub-100MB/s levels like TLC products did two years ago. The drive won't be the bottleneck if you transfer data across your network, and that's important at the home or office.

The HDTune test allows us to examine how the Seagate Nytro 141 256GB reacts when you write 128KB sequential data across the entire usable capacity. Throughput quickly dips below 200 MB/s after the workload saturates the limited SLC buffer. The workload will have to originate from a faster solid-state drive to notice the reduced performance. A hard disk drive, or a 1-Gigabit Ethernet connection, will not usually break the 200MB/s barrier.

When paired with MLC flash, the Phison PS3110-S10 controller can nearly achieve 10,000 random read IOPS at QD1. But performance peaks slightly above 6,700 IOPS with 15nm TLC flash. The combination scales well as we increase workload intensity, but the Nytro's performance is still well below the 850 EVO 250GB.

The Nytro 141 256GB is more competitive with other drives during the random write workload. The drive lands only 10,000 IOPS under the 850 EVO 250GB, but it is much faster than many of the other products. The drive doesn't scale as well, though. We recorded 46,000 IOPS at QD2 and minimal uplift as we scale up to QD32. Our test doesn't leave a lot of time for the drive to flush the SLC buffer, so the drive hits a wall just under 50,000 IOPS.

Low-cost products with planar TLC NAND have a small SLC buffer, so it only helps to boost mixed workloads for a short period. Products with 3D TLC suffer less, and in some cases, they don't suffer at all because the NAND is faster than the SATA 6Gb/s host interface.

Random data tends to come in smaller blocks, so the SSD can fit more of the workload in the buffer before the drive starts flushing the data directly to TLC. The Nytro 141 256GB scales up as we increase the workload with mixed random data, but it doesn't flutter up and down as the buffer fills and flushes.

Low-cost SSDs are not designed to run under steady-state conditions, and Seagate's Nytro product documentation for the full capacity model even states the best-fit use cases. We still run this test to see what happens when the drive is either full, or close to full. The Nytro 141 shows a slight increase in the 100% write portion of the test (on the far right). The two DRAMless SSDs and the older Mushkin Triactor don't experience the same performance increase, but the Nytro drive sells for similar price points as many DRAMless SSDs.

The random steady-state test looks ugly for the Nytro 141. We never hit absolute zero with the drive, but it did get into the low 500 IOPS range. That's still twice as many IOPS as we get from a typical consumer hard disk drive, though.

The Nytro 141 256GB doesn't deliver record breaking performance, but it doesn't fall flat either. In most of the common application workloads the drive falls somewhere in the middle, but it is usually closer to the bottom half rather than the top half.

The Nytro 141 lands just above 211 MB/s on average, and that's just below the new Plextor S3C 256GB SSD with Sk Hynix 14nm TLC flash. We hoped for a bit more, but Seagate didn't build this SSD for ground breaking performance. It's important to remember that this is essentially a server version of a hard disk drive alternative, so it is made to fit a tight budget. That way the customer can allocate more funds to the storage subsystem.

The "HDD replacements" class of products is very wide. Seagate's "good enough" is much better than the DRAMless products it competes against.

During normal desktop workloads, represented here in the recovery phases of the PCMark 8 Extended Storage Test, the Nytro 141 256GB can deliver similar service times as the Samsung 850 EVO 250GB.

The Nytro 141 performs well as long as you keep it out of steady state and with some free capacity, the drive performs well, but it is still less consistent than products with newer 3D NAND. The drive would be a good choice for a low-cost system build.

The office-focused SYSmark 2014 SE test reveals that the Nytro 141 isn't well suited for the rigors of intensive office work. The Nytro 141 is better than an HDD, but it straddles the two scores produced by the DRAMless SSDs. The drive also consumes more power than the other products when it is running at full speed.

Putting the Seagate Nytro 141 256GB in our Lenovo Y700-17 exposed a firmware issue that Seagate needs to address. This is where the gray market details become a factor in your purchasing decision.

The Nytro 141 will not perform a reboot operation in our Lenovo Y700-17. After reboot, the system will not see the Nytro 141 without a full shutdown. We tried three Y700-17 systems and loaded our image three times to confirm it was a drive-specific issue.

Seagate doesn't want to "own" the Nytro 141 in the regular consumer product sense. Seagate designed the drive for a specific type of system and validated for those platforms only. Consumer SSDs have to undergo rigorous validation testing to ensure support for a wide variety of systems. Compatibility testing is expensive, but companies easily recoup the costs through high-volume sales. The Nytro 141 isn't a product designed for high-volume sales, and the company never wanted this drive in the channel. Currently, the Nytro 141 isn't even on Seagate's website, so we'll have to wait and see if Seagate releases a firmware update to fix the issue. Chances are if there is an issue with one notebook or system there will be similar issues in others.

Problems aside, the Nytro 141 delivers an excellent balance of battery life and performance in a power-restricted configuration.