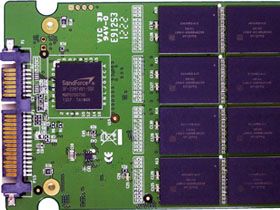 When Thomas, Don, and Paul prioritize the parts for their quarterly System Builder Marathon configurations (the next of which is coming soon, by the way), they pick the components most likely to bolster the performance of their machines in a benchmark. Graphics cards get lots of attention, as do CPUs. Now, I don't want to speak out on behalf of our chosen three, but it appears as though storage is the third-highest consideration nowadays, ahead of memory or motherboards. Specifically, our guys try, where possible, to get at least a small SSD in their builds alongside a larger conventional disk.

Building a tiered storage subsystem is something we've been advocating for a while now. Realistically, you're not going to buy enough flash-based storage to replace magnetic media. And you don't want to load up on disks at the expense of performance, right? So, mix 'em up. The video below should be justification enough.

Now, it used to be that we'd pick up 40 and 60 GB SSDs, paying $100 or so for them, just to get some sort of solid-state storage into our desktops. Those things barely had enough room for Windows 7 and a couple of apps, though. Today, you can almost get 128 GB for the same price. And while we like the idea of triple-digit capacity, even 128 GB feels cramped pretty quickly. So, with the cost per gigabyte of SSD-based storage down huge from last year, 240/256 GB is where we're pinning our ambitions for mid-range machines in 2013.

We keep up with the launches of new storage products, particularly when they involve the introduction of fresh controller technology, a NAND process shrink, or even a significant firmware update. But, even after we do our round-ups, drives continue surfacing.

As a result, today we have 10 SSDs in the 240 to 256 GB range. Some are based on familiar technology (mainly, SandForce's second-gen controller), while others employ controllers we've never tested before (Corsair's Neutron family). In the middle, we have a handful of drives based on common hardware, but set up in a new way (SandForce-based drives with no over-provisioning).

Can we promise you shocking test results that completely turn your world upside-down? No. When it comes to performance, the best of the best is pretty darned close to second-best these days. But we are seeing price tags on some of these SSDs that really impress us. Five of the 10 models we're looking at sell for less than $200. And all but one of them go for less than $1 per gigabyte. Do you think you might be able to fit a nice big SSD into your budget for 2013? If prices continue on the trajectory they're on, we don't see why not!