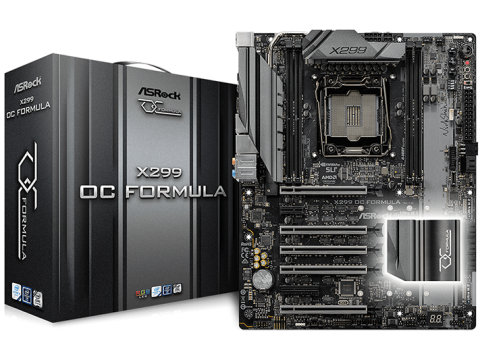 Intel specified a 140W TDP for our Core i9-7900X CPU, but the CPU can’t operate within that limit at both full speed and full AVX load. While companies that make heat-constrained units such as servers may be stuck with the inevitable performance drop, the firm hasn’t been so finicky with the way retail motherboard makers treat enthusiast models. Of the boards we’ve tested, only the Prime X299-Deluxe from Asus stayed within Intel’s stated limit.

Given the X299 OC Formula’s target market, we were a little surprised to see it come in second place in TDP. It also takes second place in our measurement from the wall socket, though that metric is impacted by additional components, as even a 4W Wi-Fi controller can force a position swap. The X299 OC Formula consumes only 3W more power on average than the Prime X299-Deluxe, but also has far fewer on-board controllers to feed.

Yet our power measurements were taken with all CPU-integrated power-saving technologies enabled, and the target market for the X299 OC Formula is likely to disable most, if not all, green features. Doing so drastically alters the power needs of any motherboard, and would thereby negate the following benchmarks. On the other hand, it’s always nice to have a “stock” baseline, no?

Synthetics used to be a great way to catch people cheating, until everyone started cheating by various degrees. It’s still a good way to look for problems, though.

PCMark shows a slight deficiency in the Creative scores of both the X299 OC Formula and X299 XPower Gaming AC. Will this have an impact on real-world-based Creative Suite and MS Office task completion times?

The two most-miserly boards (Asus and ASRock samples) also had the lowest Integer x32 throughput in Sandra Multimedia. Let’s see if we find matching deficiencies in any of our real-world benchmarks!

Though it looks great in Ashes, the X299 OC Formula falls behind at our medium preset of F1 2015. That setting is normally affected by memory performance, yet there weren’t any deficits detected in Sandra Memory Bandwidth.

The X299 OC Formula also comes up a little short in Talos. The MSI XPower Gaming AC’s performance was impacted by inclusion of Nahimic Audio solution, and a look at its original benchmark chart shows how it leads when that software is disabled.

The X299 OC Formula and Prime X299-Deluxe fell slightly behind in Handbrake, commensurate to their power savings and Sandra Multimedia deficits.

The X299 OC Formula took significant losses in both Adobe CC and MS Office timed tests, which are both driven by PCMark. These losses are also spotted in one of eight game tests, and appear to have something to do with memory. After examining both benchmarks, all firmware settings, the PCMark suite, and even the F1 2015 test, the best guess I could come up with was that the Beta BIOS 1.11 may need further development. I normally refrain from using Beta firmware, but this is the only version ASRock has made public, and I always put public firmware first.

We saw at the top of the page that the X299 OC Formula consumes barely more energy than the miserly Prime X299-Deluxe, and those low power numbers produced low temperatures to match.

Big advantages in energy consumption are offset slightly by performance deficits to put the X299 OC Formula in second place, behind the Prime X299-Deluxe for efficiency.

Overclocking is the X299 OC Formula’s purpose, yet our CPU can’t transfer heat fast enough from its core to its heat spreader to take advantage of the extra voltage needed for a high core O/C. What it can do is drive ultra-fast memory, and the X299 OC Formula obliges with a record-pace overclock. Remember, this memory is “only” rated at XMP-3866.

Overclocking may be the purpose of the X299 OC Formula, but performance is the purpose of overclocking. The problem for ASRock is the MSI’s X299 XPower Gaming AC already set a bandwidth record at a mere DDR4-3838, and the OC Formula’s DDR4-4122 isn’t able to break that record.

And the X299 XPower Gaming AC wasn’t even the cheapest premium board. That honor belonged to the Gigabyte sample. On a features basis, ASRock’s own Fatal1ty Professional Gaming i9 would be the board to beat these three competitors. Indeed, that sample already received my recommendation.

The only award the X299 OC Formula could apply for is Editor’s Choice, but the only thing I’d probably choose it for is to reach the highest-possible memory overclock. I may still do that. Yet without a performance benefit for that added clock speed, I’m left wishing that the OC Formula was also a better value in overclocking. To get there, it would need to cost around 10% less.