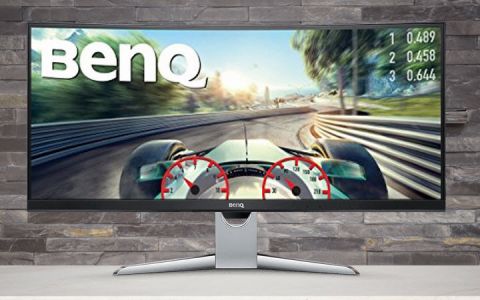 To read about our monitor tests in-depth, check out Display Testing Explained: How We Test Monitors and TVs (see page two for Brightness and Contrast testing).

We compared the EX3501R to other HDR monitors rather than bringing in gaming screens. This review is more about color, dynamic range and image quality, rather than speed. To that end, we have Dell’s S2719DM and UP2718Q, LG’s 32UD99, BenQ’s EW3270U, and Acer’s PE320QK. Like the EX3501R, the Acer monitor also offers FreeSync, but only at 60Hz maximum.

The EX3501R offers plenty of brightness in SDR mode. It doesn’t feature blur-reduction so there’s no need for any output overhead. At nearly 350 nits, it will work well in bright rooms with sunlit windows or perhaps in an outdoor setting under a tent. HDR is another matter; we’ll cover that in a moment.

The panel delivers better black levels than any IPS (in-plane switching, a screen technology for liquid-crystal displays) screen, but it’s a little short of the best VA examples we’ve measured. BenQ’s own EW3270U is another 46% darker, and that’s a visible difference. Resulting contrast for the EX3501R is 1799:1, which is good but not great.

The minimum backlight level is just below 50 nits, our preferred lower limit. Gaming in the dark will work better if the brightness slider is set on 4 rather than bottomed out. Contrast remains consistent at 1790.3:1.

You can achieve deep blacks at 120 nits and below, but you’ll need to eliminate most, if not all, ambient light to see the effect. While the anti-glare layer is optically sound, it still reduces contrast unless you’re in total darkness.

During the EX3501R’s calibration, we lowered all three RGB sliders and the contrast control. We managed to increase dynamic range by selecting a darker gamma - 4 instead of 3. This is something many VA panels allow, and we recommend trying it regardless of brand or monitor type. The measured gamma rides just above 2.2 and delivers a punchy image with strong color saturation and excellent depth.

We couldn’t coax any more brightness from the EX3501R in HDR mode. Some monitors of this type can top, 500 nits but not this one. The black level is a little lower thanks to a subtle application of dynamic contrast. The ratio, 1995.3:1, is a tad higher than SDR, but not much. You get a little extra color with HDR material as well, but the overall effect is only slightly better.

Based on these results, this monitor is better-suited for gaming than watching movies. It has good motion processing, but its picture isn’t significantly better than any other non-HDR VA display.

This monitor's intra-image contrast is better than most IPS screens, boasting a 1532.8:1 ANSI result. There are some VA monitors with higher results, but dynamic range should be a secondary consideration if selecting this product. Instead, buy the EX3501R for its speed and FreeSync.
MORE: Best Gaming Monitors

Prev Page OSD Setup and Calibration Next Page Grayscale, Gamma and Color
9 Comments Comment from the forums
Be In the Know