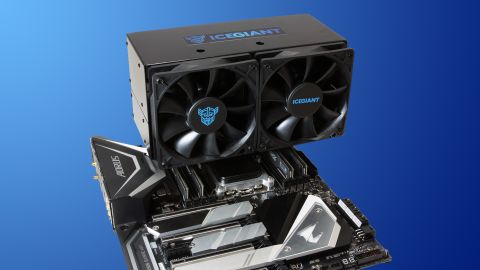 We wanted to compare the IceGiant prototype against a couple of our more prevalent Threadripper heatpipe coolers we’ve seen in recent months. All have been tested on our 32-core AMD Threadripper 2990WX running at 3.40Ghz @ 1.20v on that big, E-ATX Gigabyte X399 Aorus XTreme motherboard.

We tested the IceGiant with both the standard, 2-fan push configuration as we received it, but also with an additional two fans for push-pull airflow through that massive cooling tower, since we were given information that the cooler will ship with additional mounts to allow for this configuration. Since this is a prototype and we had the ability to evaluate performance differences, we wanted to see if adding another pair of fans would provide meaningfully improved cooling capability.

Interestingly enough, the IceGiant produces similar CPU core readings with either 2- or 4-fan setup, although the push+pull configuration with quad fans does  help in lowering our motherboard’s power management components where that thermal probe rests. However, knowing that we can effectively omit those extra two fans will have an impact in our pricing as tested further down.

Knowing the overall dimensions of both the Noctua NH-U14S TR4-SP3 and the Arctic Freezer 50TR,  both of these coolers side-by-side are not able to challenge the physical size of the IceGiant ProSiphon Elite. As a prototype, it might lend some argument that simply having acres of surface areas gets you better performance, although we’re told the retail version will not only be smaller and lighter, but should perform even better. Time will tell.

The dual 120mm Delta fans on the IceGiant prototype run at a mighty 2300 RPM, moving a large volume of air through the cooling tower. However, higher-speed fans usually means higher registered noise levels.

Mutter the words ‘Delta fans’ and most PC enthusiasts from the early 2000’s will conjure up the masses of buzzing gaming machines at LAN parties everywhere, droning on like a swarm of digital honey bees. The same applies here with the Delta fans on the IceGiant, as they run away from the pack in terms of decibel levels when the fans are running at full speed.

Even though the IceGiant did so well in thermal load tests, the noise levels produced from those screaming cooling fans impacts the acoustic efficiency of the unit. It will be very interesting to see the fan choice on the retail units in terms of thermal performance and decibels measured.

With information on the IceGiant website indicating that the IceGiant ProSiphon Elite will be priced at $119.00, it's slightly higher than the Noctua NH-U14S TR4-SP3 and nearly double that of the Arctic Freezer 50TR. For the push+pull configuration, we also factored in the cost of an extra pair of fans, whether that be included with IceGiant ProSiphon optional configuration pricing or as an end-user add-on. Either way, we felt that an additional $20 would be a decent average price premium for a pair of 120mm mid-range exhaust fans.

Coupled with those noisy Delta fans, the unit pricing of the IceGiant ProSipon prototype combines to produce a rather skewed performance value chart, even though it managed to impress with excellent thermal load temperatures.

FLIR ONE Pro thermal imaging shows the standard fan configuration at 50% speed compared to the additional fans for push+pull at 50% speed with minimal difference in terms of thermal soak and loading of heat across the IceGiant ProSiphon prototype. If you look closely enough, there are some very minor changes in registered hue evident mid-way and above on the cooler in the push+pull image, although it's well within the range of standard deviation.

As with the 50% fan speed thermal imaging comparison above, the 100% standard fan configuration vs. the 100% push+pull configuration offers nearly identical thermal load patterns in both images. The push+pull image does seem to indicate slightly lower temperatures where the air appears to channel between the intake and exhaust fans.

We do have some unanswered questions around whether the IceGiant unit’s overall dimensions and sheer volume alone account for its impressive performance, or if this trend of class-leading cooling performance will carry on with the smaller, sleeker version of the ProSiphon Elite once retail versions land in the hands of system builders -- and on our test bench.