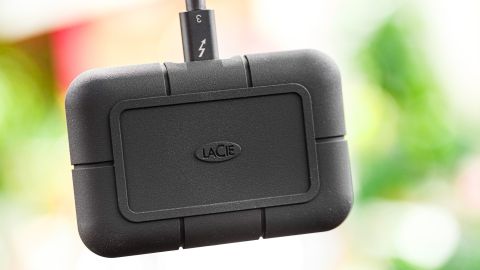 With a durable silicon-coated casing and performance of up to 2.8 GBps, LaCie’s Rugged SSD Pro is a fast IP-67 rated beast that works over both Thunderbolt 3 and USB-C.

LaCie’s external drives have been popular for over a decade for their ability to keep up with professional workflows and endure a life of constant battery. But these days, one drive rules them all: LaCie’s Rugged SSD Pro. With a Thunderbolt 3 interface, LaCie’s Rugged SSD Pro can deliver up to 2.8 GBps in performance for those who need speed as much as durability.

With a generous 5-year warranty that includes Rescue Data Recovery Service, it’s about as “professional-grade” as you can get. That said, with a very high cost per gigabyte, it’s a tough sell for many. This is a drive for those whose data—and the speed at which you can access it—is more important than saving a money.

When we tested LaCie’s Rugged SSD (the non-pro model), the performance was stellar. Without a doubt, it makes for a great match for professional use. It’s tough, responsive at all times, and secure. Also, the company’s Rugged BOSS SSD is quite convenient for those who travel often and are interested in backing up content without a PC or Mac. But what if you need something a bit faster for your 6K, 8K, or even slow-motion footage? That’s where LaCie’s fastest external SSD, the Rugged SSD Pro, lands in the company’s SSD landscape.

The Rugged SSD Pro has an identical design as the non-Pro model except for the color; it’s black instead of orange. But what really differentiates the two is the fact that the Rugged SSD Pro is nearly three times faster, thanks to a higher-bandwidth Thunderbolt 3 connection, instead of a 10 Gbps USB link. The Rugged SSD Pro is designed to transfer data as fast as possible, so you save time when dealing with massive files or libraries.

LaCie rates the Rugged SSD Pro to deliver sequential read performance of up to 2,800 MBps, but the SSD lacks a defining write speed specification. In testing, we found our 1TB sample capable of up to about 2.3-2.4 GBps when hammered with sequential writes, though. The 2TB model should be able to sustain the same. Thunderbolt 3 speeds come at a premium though, and with pricing listing at about $400 for the 1TB model and $700 for the 2TB, the Rugged SSD Pro is twice the cost of most 10 Gbps portable SSDs.

LaCie backs the Rugged SSD Pro with a 5-year warranty and rates it to endure some abuse though. But, that’s not all. The Rugged Pro also comes with Rescue Data Recovery Service tagged onto its 5-year warranty. If your drive gets damaged or just fails, you get a free data recovery attempt. That’s a service that can typically cost hundreds or even thousands of dollars depending on the case.

The Rugged SSD Pro featurea support for S.M.A.R.T. data passthrough, as well as Trim. The only thing lacking in LaCie’s Rugged SSD Pro is AES 256-bit encryption password protection. That’s a secure feature that the cheaper Rugged SSD comes with. LaCie Rugged SSD Pro comes preformatted exFAT for compatibility with both Windows and Mac computers, but you can format it to your specific need. We have formatted our sample as NTFS for Trim support and consistency with our other tested drives.

Instead of the super short 5.5” cable the USB 10 GBps Rugged SSD comes with, LaCie packed a nearly-as-short 8-inch Thunderbolt 3 (40Gb/s) cable with the Rugged SSD Pro. The company also provides a download of the latest LaCie Toolkit to aid in keeping your files backed up or synced with the device.

With small dimensions measuring 0.7 x 2.6 x 3.9 inches and weighing in at just under 100 grams, LaCie’s Rugged SSD Pro is compact and travel-ready. With a metal casing covered in a grippy black silicon coating, LaCie’s Rugged SSD Pro is very solid. The ruggedized SSD can handle 3m drops, can get run over by a car, and is IP67 water and dustproof rated. It can remain submerged in one meter of water for up to 30 minutes in case you drop it in a puddle, a stream, or maybe even your toilet. Expensive electronics have a tendency to wind up in the worst places.

The waterproof USB Type-C port is located on the long side of the device rather than the short side like on most externals, and there is a white activity light next to the port. Thanks to a pair of Pericom Semiconductor PI3PCIE3412 PCIe switches, the Intel JHL7440 Thunderbolt 3 controller, and the JMicron JMS583 USB 3.2 Gen 2 controller, you can use the device with most Thunderbolt 3 and USB-C host devices, albeit at a slower speed when over USB. LaCie opted to utilize some of Cypress Semiconductor’s controllers for the task to manage the power to the device, too.

At the heart of the Rugged SSD Pro is Seagate’s FireCuda 510 M.2 NVMe SSD. This is the same SSD that comes in the Rugged SSD, but now it is a bit less restricted thanks to the faster Thunderbolt 3 interface. The SSD itself comes in an M.2 2280 double-sided form factor. Powering it is Phison’s PS5012-E12, a high-performance 8-channel NVMe SSD controller. It leverages dual Cortex CPU cores as well as dual co-processors (CoXProcessor 2.0) to balance NAND management and host requests at speeds of about 666MHz.

Our 1TB sample features thirty-two 256Gb Kioxia BiCS3 64L TLC NAND flash dies while the 2TB model features 512Gb-density dies. These interface with the controller at speeds of 533MT/s and operate at 1.8V. Additionally, this controller utilizes a DRAM-based architecture, so it takes advantage of some SK Hynix DDR4 operating at 1,600MHz. At 1TB, our sample comes with 1GB of DRAM cache while the 2TB model comes with 2GB.