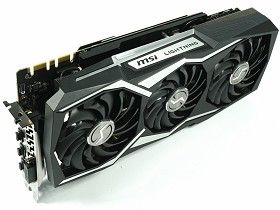 This card is really fast, but also sufficiently silent. And if you want to try your hand at overclocking, the big cooler and binned GPU really stack the deck in your favor.

There are just two moments of shock you'll have to endure on your journey with MSI's GeForce GTX 1080 Ti Lightning Z. First is when you open your wallet to pay for this thing. It's sold out pretty much everywhere, leaving Amazon-based sellers asking (at the time of publishing) $2000. That's insanity. Then, there's the first time those three fans spring into action. MSI should address this issue with a firmware update; the starting pulse is way higher than it needs to be otherwise.

Otherwise, everything about this card is great. We found no other flaws with it.

If we're throwing out suggestions, though, it would have been nice for MSI to include a support bracket with its accessory bundle. The GeForce GTX 1080 Ti Lightning Z is massive, and we can't imagine anyone wanting to transport or ship a gaming PC with it installed for fear of damaging their motherboard. The optional three-slot bracket might help a bit, but even then there's just too much weight on the PCIe slot.

[Update 9:00am P.T., Oct 23, 2017: Due to lack of reasonable availability, we've updated the following final verdict and removed the award we originally gave this product.]