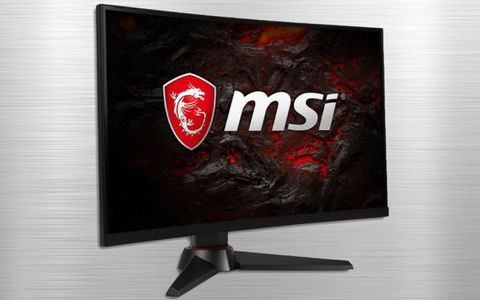 The MAG24C only has one picture mode that allows calibration. Since there are no color gamut options, below we show you  before-and-after results measured in Standard picture mode.

We describe our grayscale and gamma tests in detail here.

Out of the box, images on the MAG24C were visibly green. We saw errors at all brightness levels, but with all Delta Es under 8, it wasn’t too grievous. The first graph represents the Warm preset. Cool changed the tint to blue, which might be preferable to some users. That will make the image appear brighter but shallower in tone. We recommend trying our settings on page two if you aren’t able to calibrate with a meter. It’s not the best grayscale tracking we’ve seen, but it is a significant improvement from the MSI’s default state. After adjustment, we still saw a touch of green at 10%, but all other levels were below 3dE.

At 6.27dE, the MAG24C’s out-of-box accuracy is below average. Most monitors come closer to the ideal 3dE level, and the two best-performing monitors in our comparison group didn’t require calibration. Once a few small changes were made to the MAG24C, it returned a much better 1.66dE score in the grayscale test.

We have no complaints about the MAG24C’s gamma tracking. Aside from a tiny dip at 10% and 20%, the trace stuck closely to the 2.2 line. Since there is so much contrast available, we would’ve liked to see a 2.4 option, but MSI only includes 1.8 and 2.2. The latter is fine for any games or other content.

The MAG24C took first place in the tracking test with a tight .15 range of gamma values. Few monitors of any type can boast better performance here. With an average value of 2.15, it placed second in our deviation test. That result is only marred by the slightly low 10% and 20% numbers in standard mode after calibration. Overall though, this is above-average performance really adds to image depth and color gamut accuracy, which we’ll show you now.

Those who like a bit of extra color will enjoy the MAG24C. The MAG24C takes a unique approach to extended color. Most monitors like this will oversaturate at all points, making the image look a little unnatural and cartoonish. In our MAG24C’s case, however, inner targets were nearly perfect, and the extra gamut volume only came into play at the outer points of the triangle. However, red significantly exceeded the limit. Blue and yellow were right on the money, while green and magenta were just slightly over the mark. Still, with near-neutral luminance levels, you won’t know there’s any extra color available unless the image is made up of very bright elements. Most content looked the same to us as it would on an sRGB display.

Because most of its saturation and luminance points are on-target, the MAG24C showed a very low 1.54dE average color error.

Gamut volume exceeds the sRGB spec at 123.36%. Color-critical work will require an ICC profile for accuracy, but entertainment-seekers will be satisfied with the extra vividness. While the 79.64% Adobe volume is largely irrelevant to the gaming crowd, movie-watchers will like the 83.2% DCI-P3 volume result we recorded.

Prev Page Brightness & Contrast Next Page Viewing Angles, Uniformity, Response & Lag
16 Comments Comment from the forums
Be In the Know