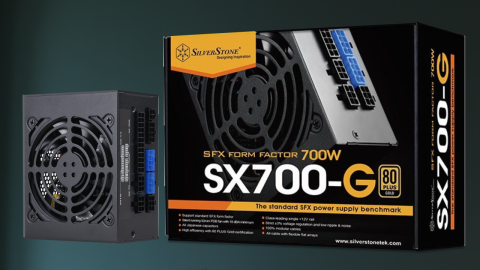 Practically, this is an overclocked version of the SX650-G with a higher price. But the SX700-G's lack of two EPS connectors is a significant downside, while its overall performance doesn't match Corsair's quieter SF750. With that said, the SF750 costs about $20 more, so you'll have to decide whether to spend a premium on the better-performing SF750 or save a few bucks on the SX700-G.

The powerful SX700-G is based on an enhanced version of SilverStone's SX650-G. It does feature a few component changes. However, we would have liked to see the SX700-G include two EPS connectors, a longer hold-up time, and higher efficiency under light loads.

Apparently, SilverStone wanted to snatch the crown for highest wattage in the SFX category. It took advantage of the fact that Corsair delayed its SF750 to make this happen. But now that the SF750 is available, SilverStone's SX700-G can't touch its competition from Corsair (even though the SF750 is ~$20 more expensive).

If cost is your biggest consideration and Corsair's SFX-based flagship is too expensive, consider the SX650-G over SilverStone's SX700-G. Differences between those two models are minor, and the 650W PSU will save you some money.

As a pioneer in the small form factor power supply business, SilverStone has a rich portfolio of compact PSUs. The brand's primary goal is to shrink its power supplies as much as possible, all while increasing their maximum capacity. The SX700-G is a solid example of its success; we managed to push it beyond 1000W in our tests, despite a 700W maximum power rating. It's noteworthy to see such a small PSU deliver so much power without a problem.

The SX700-G's warranty looks short compared to the seven-year coverage offered by EVGA and Corsair. SilverStone should increase this model's warranty to five years if it wants to give customers more confidence.

We expected the SX700-G to include two EPS connectors. Unfortunately, SilverStone only arms its 700W PSU with one. The cables are understandably short since SFX PSUs are intended for small enclosures. But the distance between this model's peripheral connectors is ideal at 200mm.

The EPS and PCIe cables use 16-gauge wires for lower voltage drops. And as you can see in the table above, there are no in-cable capacitors to improve ripple filtering.

This is the same platform used for SilverStone's SX650-G with a few component changes allowing for 50W-higher capacity. Although it uses high-quality parts, we'd like to see a better bulk capacitor in the APFC converter. The Rubycon USH line is good enough, but in this price range we're used to finding bulk caps rated for 2000 hours at 105°C. Worse, the bulk cap's capacity is low, preventing it from offering more than 17ms of hold-up time.

The cooling fan is manufactured by Globe Fan. It uses a fluid dynamic bearing, so we know it'll last a long time. While there is no semi-passive mode, this isn't a problem because the fan spins at low speeds under light and moderate loads.