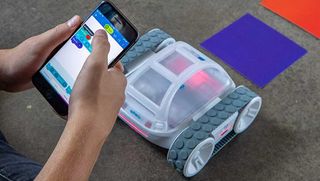 If you're into robots or Raspberry Pi, chances are that you've either built or want to build some kind of robot vehicle. There are a lot of DIY robotic car kits powered by Pi (as well as Arduino); however, most of these are a little flimsy and definitely not made for playing with outdoors.

Enter the Sphero RVR. We've tested this STEM robot ourselves, and it's packed with features appealing to a wide range of ages. The car arrives pre-built and has really strong build quality -- so much so, in fact, that Sphero says you can use it outside. It originally sold for $249, but it's currently selling for $173 on Amazon. The cheapest we've seen the RVR sell for is $169, so this is a great tech deal.

Sphero RVR robot: was $250, now $173 @ Amazon
This robotic vehicle is loaded with sensors, including a color sensor, an accelerometer, IR sensor and gyroscope. Best of all, you can attach a Raspberry Pi to the RVR and use it to add all kinds of features, including a camera or robot arm.View Deal

Simple enough for kids, but with enough durability and features for an adult, the RVR doesn't actually require a Raspberry Pi. The robot comes with its own controller board inside that you can program with the Sphero Edu app, which has its own block-based language (good for kids) or JavaScript.

The RVR's sensor list includes a color sensor, light meter and IR sensor. It has some gorgeous, configurable RGB lights and a removable battery (so you can buy extra batteries to use while you're charging). Some RVR projects Sphero advertises include using attachments to take water and soil samples.

However, the best thing about the RVR is that it has a built-in serial port that connects directly to the GPIO pins on a Raspberry Pi, a USB port that outputs power for a Raspberry Pi and a mounting cover to which you can screw a Raspberry Pi (or other circuit boards).

Using Sphero's python API and a Raspberry Pi Zero W, my son and I programmed our RVR to change its LED lights to match whatever the color sensor sees. Even better, we could attach a robotic arm, a live streaming camera or any other set of sensors to the Pi and use those to control the RVR.

Even the discounted price of $172 is a lot to spend on a robotic car, but the RVR is worth it.

More Sphero RVR Deals
Sphero RVR: All-Terrain,...
Amazon
Prime
£249.99
View
We check over 130 million products every day for the best prices
Topics
Deal
No comments yet Comment from the forums
Be In the Know