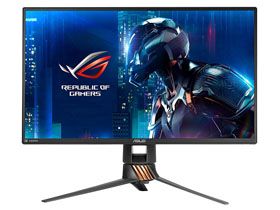 Some users may balk at paying a lot of money for a TN monitor, but one look at the PG258Q’s gaming prowess will quickly change their minds. For sheer playability, this display is the finest we’ve reviewed so far. Control response and motion quality are on another plane of existence when compared to most other gaming screens. Once calibrated, color and contrast are among the best. The styling is a matter of personal taste, but Asus’ starship/steam-punk thing is growing on us. If you’ve just dropped a lot of money on your gaming rig, the PG258Q is a perfect finishing piece. We could keep extolling its virtues but we’d rather get back to gaming.

Ever since the original Asus VG248QE was introduced, the race towards higher refresh rates has continued unabated. It seems only recently we saw the first 160Hz screens in our lab. Now Asus has broken new ground with its first 240Hz display, the ROG Swift PG258Q. But that isn’t the whole story. It also sports G-Sync from 24-240Hz, ULMB up to 144Hz, and a host of features sure to appeal to enthusiasts.

Right off the bat, some of you are saying “not another TN panel!” But stick with us here, it’s not so bad. For starters, it’s one of the nicest TN screens we’ve ever seen. Viewing angles look far better than pretty much any other TN display we’re aware of. And our photos on page five support that. And yes, it uses Frame Rate Compensation (FRC) to take its native 6-bit color depth to 8-bits. But thanks to that, the PG258Q has the lowest input lag we’ve ever measured. Again, page five has the details.

The feature list is just what you’d expect from Asus’ premium ROG line. You get ULMB, and it works up to 144Hz. The panel is bright enough that output remains high in both G-Sync and ULMB modes. And you can take advantage of independent brightness settings to keep levels matched. Another improvement is the elimination of the refresh overclock feature. You can simply choose 240Hz in Nvidia Control Panel rather than rebooting the monitor to change rates.

Held over from other ROG screens is the GamePlus feature with its reticles, timers, FPS counter, and screen alignment guide. Asus has also retained the excellent OSD joystick navigation and styling cues reminiscent of something you’d see on the deck of a starship. It’s a premium package at a premium price, but so far it seems like you’re getting your money’s worth. Let’s take a look.

The carton is quite substantial and more than capable of protecting its expensive contents. Rigid foam surrounds the panel and attached upright. The metal base, input panel cover, and cable bundle reside in a top tray. Those cables include HDMI, DisplayPort, and USB 3.0. The power supply is external and looks like a miniature Apple TV.

Assembly requires only that you screw the base on with a captive bolt. You can also snap lenses in place that work with the Light In Motion feature to project colored patterns onto your desk. More on that below.

To me the panel says “starship” while the base says “steam punk.” The same accents we first saw on the PG348Q ultra-wide are here on the PG258Q. The base has copper-colored trim, which continues around back on a large ring that surrounds the panel/upright interface. It seems there is no VESA mount, so you’ll have to use the included hardware.

The screen is surrounded by a very thin bezel that measures just 7mm on the sides, which is great for multi-monitor setups. The top is slightly wider at 9mm, and the bottom goes to 13mm. No lighting is visible on the front except for a tiny power LED at the lower right edge. It glows red for G-Sync, green for ULMB, and white for Normal mode.

Control keys are around back and are topped by a slick joystick that makes OSD navigation a snap. Our only nit-pick is the power button feels the same as the others and is not separated from them. It’s too easy to accidentally turn off the monitor when you’d rather pop up the GameVisual menu. It has a different texture though, so if you’re careful, you’ll soon get the hang of it.

Like other ROG Swift monitors, the PG258Q has a Light In Motion effect. It takes the form of a small LED that projects a colored symbol on your desktop. It has three intensity levels, or you can turn it off.

Styling dictates a somewhat thick panel with a rounded taper across the back. There are no speakers, nor are there side USB inputs. One upstream and two downstream (version 3.0) ports reside on the bottom-facing input panel. Also there are one each of HDMI and DisplayPort along with a 3.5mm headphone output. Once you’ve plugged in all the cables, an included cover snaps on to hide the jacks. Cable management is aided by a hole in the upright.