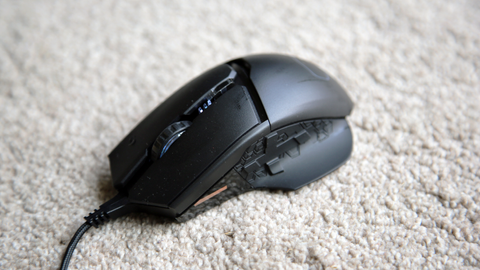 With the MM830, Cooler Master clearly wants to show off its peripheral prowess. But extreme DPI levels, loads of RGB and a tiny built-in screen doesn't quite make for gaming mouse excellence.

Cooler Master MM830 is a gaming mouse with a ton of options designed to help you dominate those pesky AAA titles, with perhaps its most eye-catching feature being the ridiculously high 24,000 DPI optical sensor buried deep in its core. It promises to offer a level of in-game precision that other mice just cannot match. In fact, precision seems to be the key theme with the MM830, with a “precision” scroll wheel included as well, whatever that is.

That said, the gaming mouse market is an overcrowded arena right now, and there are some very big names out there vying for your hard earned coin. Price wise, the Cooler Master MM830 sits proud and true alongside a very respectable price tag of $79 or £60, pitting it against the likes of the Logitech G502 Hero, and the Steelseries Rival 600, two excellent pointers that prove that even at the lower price range, you can net yourself a feature-jacked mouse with excellent performance and customization.

To help the MM830 stand out from the crowd, Cooler Master has included that already mentioned bad-ass 24,000 DPI sensor, along with a D-Pad located where your right-hand thumb should rest, a huge amount of RGB lighting, and even an OLED display. But the question remains: Are these features that it’s competitors lack really that vital? Or are they just gimmicky additions included in a bid for attention? Let’s find out.

The MM830 isn’t Cooler Master’s first foray into the gaming mouse market by far, and we’re pleased to report that the build quality feels much improved compared to the MM520 and MM530, which both felt a bit too plastic and insubstantial in contrast.

So, while it’s still made of plastic, the MM830 feels far more solid than its predecessors, though it still is a little too light compared to some of its competitors we mentioned earlier. Combine that with the 24,000 DPI sensor, and you may get a mouse that’s too sensitive for many people, at least before you dive into the configuration menus anyway.

There’s no doubting exactly who this mouse was designed for--gamers. You’ll find those same clichéd sharp lines and angles that are often found on gaming peripherals, along with the cornucopia of flashing RGB lights and scrolling text that runs along the side of that OLED display.

While for some this look will likely complement their gaming setup, it may put off those looking for something a little more subtle and / or sophisticated. Plug this in at work, and your co-workers may wonder why you have some form of colorful Morse code tapping away on the place where your hand usually rests.

The two main buttons are nice and long, and despite the sharp angles of the overall design, the Cooler Master MM830 feels impressively comfortable to hold. Unlike some gaming mice, such as the Roccat Kova Aimo, the Cooler Master MM830 doesn’t come with a surplus of extra buttons. Instead, you get a ‘hidden’ d-pad that offers four buttons and is placed on the left-hand side of the mouse, where your thumb rests. It’s a decent location for quickly accessing some of the buttons, especially the top and front buttons, but the bottom and back buttons felt more awkward to reach.

There’s also a clickable scroll wheel between the left and right mouse buttons, and a DPI switch button beneath the wheel for changing the MM830’s sensitivity on the fly. The Cooler Master MM830's RGB lighting can be configured with the usual proprietary software, and they cover a total of six LED zones – some of which blend into each other. The back, scroll wheel and Cooler Master logo on the body of the mouse all glow. There are also three led lights above the DPI button that glow. But these can’t be configured. Instead, they change color depending on which of the four levels of DPI sensitivity is selected.

At the front of the left-hand side, next to the thumb rest, is the OLED display, with a 96 x 24 resolution. This can be configured in the Cooler Master Portal software to display information about your game, the mouse and even your PC, like CPU and GPU usage. You can also design your own pixel artwork to display.

It’s a nice feature on paper, and we liked the thought of being able to keep an eye on our PC’s resources while playing, but it doesn’t quite work in practice. Its placement makes it difficult to view without lifting the mouse from the desk and tilting it. Sure, that’s not the most onerous of tasks, but it’s something you won’t be able to do in a fast-paced competitive game like Apex Legends. When we first saw the OLED screen we wondered if it would just be a gimmick. Sadly, it seems it is.

With it’s crazy-high DPI , Cooler Master wants the MM830 to excel in precision, so we used it in a number of games where pin-point accuracy is essential, from Apex Legends, Total War Warhammer II, and League of Legends in between. The MM830 performs perfectly fine, with a fast and responsive feel, and a 1000 Hz polling rate. It does a great job of fast, frantic movements in FPS matches, while also offering fast acceleration, allowing us to sweep the cursor from end of the screen to the other in a flick of the wrist, ideal for real time strategy games.

The sensor itself is Pixart’s PMW 3360 Optical sensor. What’s interesting about that is as standard this thing only has a DPI of about 12,000, meaning that there’s some interpolation tomfoolery going on on the software side of things to boost the mouse's reported DPI all the way up to 24,000. That said, used at its stock settings, this mouse sensor lacks any hardware acceleration at all, and is highly regarded across the sensor elitist communities, a reputation Cooler Master is clearly eager to take advantage of.

Sensor specs out of the way, if you want to use some of the more advanced features of the mouse, such as the ultra-high DPI and D-Pad buttons, you’ll want to tweak them in the Cooler Master Portal software. We experimented with a number of DPI settings, including the 24,000 maximum. But as usual, anything over 10,000 was far too sensitive and jerky. To be brutally honest, the 24,000 DPI setting was downright unplayable. While that number might look impressive printed on the box and supplied with the marketing materials, very few -- if any -- gamers will be using it, at least all the time.

While the ability to flick through DPI settings using the button on the mouse is welcome, it’s a bit of a shame that there’s only four levels of adjustment via hardware. Other gaming mice offer more, which gives you a bit more flexibility. The DPI settings can be tweaked in the Portal software via sliders, and it’s easy enough to configure, though you can only go up by 100 DPI increments. For most people, this should be fine, however. And, while the 24,000 DPI won’t be used by everyone, at least you can find a high DPI setting that suits your playing style.

Setting the D-Pad buttons for custom commands and macros is also done in the software, but we found when gaming that the placement was a bit too awkward to use comfortably and consistently, especially as the pad needs a good press to register.

Performance-wise, then, it’s a bit of a mixed bag.

As for the 24,000 DPI, it’s just too sensitive for gaming at 1080p or 1440p. However, if you have a huge monitor with a sky-high resolution or an Ultrawide monitor with a lengthy aspect ratio, or you're an incredibly precise elite competitive gamer, that high speed might suit you better. For most though, it makes the mouse feel less precise, not more.

The Portal Software is an essential install, as it allows you to configure the extra buttons, add macros, and save profiles which the mouse can automatically switch to when opening a specific game. You can save up to four profiles, which is a bit limiting, but it’s enough if you play a few games and want to have the Cooler Master MM830 perform a certain way for each title.

The software itself is easy enough to use. But it's far from pretty, with over-sized fonts and a general feeling that not a lot of love has been put into the aesthetic or user experience side of things. Still, it does the job, and with a bit of time and tweaking, it allows you to configure the Cooler Master MM830 to better suit your play style relatively easily.

The Cooler Master MM830’s two headline features look good when printed on the box. But sadly in the real world, they don’t offer much for most gamers. The OLED screen isn’t easy to read when the mouse is in use, and ends up only good for some extra flair when the mouse is sitting unused on your desk. And then there’s the sensor: We just can’t see many wanting to set the Cooler Master MM830 to its maximum 24,000 DPI setting. And while that high number is a fabulous marketing tool, it doesn’t really add much to the credibility of an already credible sensor.

There are cheaper gaming mice out there with more substantive features (if maybe with less flash) than the Cooler Master MM830.