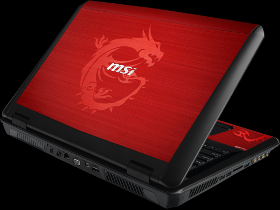 MSI GT70 Dragon Edition 2: A Gaming Notebook For The One Percent

Unlike the MSI GX60 we recently reviewed, which sought to maximize mobile gaming performance as inexpensively as possible, the company spared no expense on its GT70 Dragon Edition 2. And after MSI laid a foundation with its barebones platform, Xotic PC stepped in to further boost the system's performance.

First, the standard Core i7-4700MQ quad-core processor was swapped out for a top-end -4930MX Extreme Edition. Next, Nvidia's GeForce GTX 780M received an overclock (both the core and memory). Finally, the system’s 17.3” FHD display was professionally calibrated. And thanks to the special Dragon Edition panels, there was no need for the company’s famous custom wraps or graphics.

The Core i7-4930XM processor inside the Dragon Edition 2 is Intel's top-of-the-line Haswell-based processor. It sports four unlocked cores running at a 3 GHz base frequency, though Turbo Boost takes one core to 3.9 GHz.

Compared to the Core i7-4700MQ you'd normally find in this system (also Haswell-based), the Extreme Edition chip has an extra 2 MB of shared L3 cache, higher clock rates, a 10 W-higher TDP, and a way higher price tag (in excess of $1000). When the GT70 isn't pushing big power consumption, it benefits from the Haswell architecture's power-saving features, plus Nvidia's Optimus video switching technology, to help extend run times on battery power.

The Dragon’s GeForce GTX 780M discrete graphics module also represents the top-of-the-line from Nvidia. With 1536 cores running at 823 MHz (and GPU Boost speeds of up to 850 MHz), plus a massive 4 GB of GDDR5 RAM running at 2.5 GT/s, the 780M offers substantially more performance than its predecessor.

But there’s more. Xotic PC takes top-end potential a step further by boosting the core clock by an additional 75 MHz and the memory by 500 MT/s, taking the module's core to 915 MHz and its memory to 3 GT/s. In order to guarantee the stability of those settings, the company tests them for three days straight before shipping and covers them under the system's warranty.

MSI definitely went the enthusiast route when it defined the Dragon’s specs. The primary system drive is composed of three 128 GB SanDisk SSDs in RAID 0, with a 1 TB hard drive serving as a secondary storage space. The 17.3” FHD WLED screen is anti-reflective, and the multi-color, backlit keyboard is by SteelSeries, makers of boutique gaming peripherals. The built-in wired and wireless networking controllers come from the Atheros Killer DoubleShot series, which includes the company's QoS technology for prioritizing gaming traffic. Moreover, the built-in speakers and subwoofer are sourced from Dynaudio, the same company that supplies sound in Bugatti automobiles. The Dragon even comes with a Blu-ray writer.

Obviously, this notebook has all of the right parts to deliver serious gaming performance, but its flagrant visual styling and imposing stature are also clearly designed to stand out. After all, nothing screams "look at me" like a two-inch-thick, red laptop emblazoned with dragons.

MSI doesn't cut corners on available I/O, either. Three different video output options mean that you can plug the Dragon into most monitors. You also have the option to drive a trio of displays simultaneously in a triple-screen array. The Dragon packs three USB 3.0 ports on the left and another pair on the right. Plus, one of the ports can charge other devices, even when the machine is powered off. You also get separate gold-plated jacks for headphones/mic/audio-in/audio-out, and an SD card reader.

On paper, it looks like MSI's GT70 Dragon Edition 2 offers a ton of gaming power and features. But before we find out if this notebook's spec sheet translates to real-world performance, let's take a tour of the Dragon, inside and out.

Current page: MSI GT70 Dragon Edition 2: A Gaming Notebook For The One Percent

Next Page GT70 Dragon Edition 2 Exterior: Design And Features
Topics
Laptops
MSI-Microstar
26 Comments Comment from the forums
Be In the Know