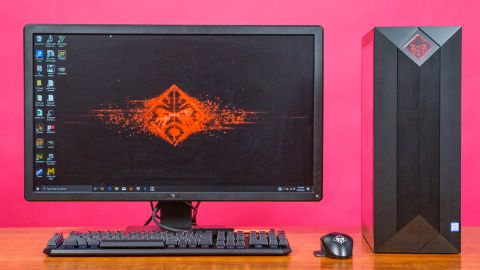 The HP Omen Obelisk is a sleek desktop with premium part options, but its case design makes it difficult to make significant upgrades in the future.

The days of PCs built by big vendors with custom parts may soon be behind us. The 2019 edition of the HP Omen Obelisk ($3,103.99 as tested; $1,299.99 to start) takes a simple premise and upgrades it: a gaming desktop from an OEM with all standardized parts, but now with high-end chips, graphics, memory and watercooling. To prove it, our review unit is maxxed out with an Intel Core i9-9900K, Nvidia GeForce RTX 2080 Ti, 64GB of DDR4-2666RAM and 3TB of storage.

With standard parts, it should be simple to upgrade, but HP’s decision to put a screw inside the case that holds the right-side panel on means that major upgrades may not be as easy as one would hope. Nevertheless, strong performance and great looks make this one of the best gaming PCs you can buy.

HP’s design is really clean, and I admire the chassis it put together. It hasn’t changed from last year’s model, and I’m mostly OK with that. It’s a fairly compact chassis that fits a micro ATX motherboard and other standardized parts.

The design is a black metal monolith that comes to a point in the front with an RGB HP Omen logo. All of the ventilation on the sides and the top are in a triangular criss-cross pattern, which looks classy. Our unit has a glass side panel, though the cheaper options have metal side panels. The glass lets you see into the chassis, which has customizable RGB lighting controlled by a daughterboard. And that glass panel comes off easily with the press of a button on the back of the desktop.

The Omen logo is printed on the glass in black, and I wish HP would leave the glass alone so it didn’t interrupt with the view of the components. (The logo appears a third time, on the other, aluminum side panel).

But I worry about one big thing with this design: airflow. The only actual case fan is a 120mm fan in the back of the system. Most of the air comes in through the bottom of the case, where HP put in a removable dust filter. There’s also a vent on the top (mostly blocked by the watercooler’s 120mm fan) and another on the front to let some air in to cool front-mounted HDDs.

There’s less than five millimeters of space between the bottom of the case and the vents on the bottom, which isn’t much room for air to get in. HP tells me it hopes to make a change to Obelisk cases hopefully as soon as September to make it about 15mm, but if you buy it as of this writing, you’ll have the same amount of space I did.

The GPU has a blower style cooler, and while that means it won’t be cooled as well as some other graphics cards, at least that waste heat isn’t going to be inside the case with just a single 120mm case fan.

On the top, the ports are in a small indentation, along with the headphone jack, microphone jack and the power button. I see this as an easy way to protect USB sticks from being knocked out, though the indent isn’t big enough to hold a hard drive or bigger peripherals. When it’s empty, it helps keep the clean aesthetic.

The motherboard has an S/PDIF port, USB 3.1 Gen 2 both in Type-A and Type-C, four USB 3.1 Gen 1 Type-A ports, an ethernet jack and audio in/out ports. There’s HDMI and DisplayPort on the GPU for video, as well as VirtualLink.

HP’s website lists the Obelisk as “Sleek. Powerful. And easy to upgrade.” But the last of those three isn’t necessarily true.

In theory, upgrading the Obelisk should be a cinch. It uses all standard parts, from the motherboard to the CPU cooler to the power supply. This is how all desktops should be, even from big brand-name vendors. So in theory, you could replace any part just like you would if you built your own and use this chassis for years.

Cable management while upgrading, though, can be a bit of an issue, especially if you’re replacing parts. To remove the rear panel of the case, you need to take out a screw inside the of the case that holds it in place. That screw is lost among all of the extra zip-tied cables attached to the power supply, so you may have to push them aside.

And in this case, the screw on our review unit came screwed in very tightly, to the point of starting to strip as we tried to remove it. HP should seriously consider adding a few more screws to the back of the machine instead (maybe even thumb screws for tool-free opening) to make it more user-friendly. At best, if your screw comes out, it’s still a pain in the butt to get to.

This hasn’t changed since last year’s model, and last year, the screw came out fine. But this year, it has proved to be to the detriment of the machine, which I couldn’t truly upgrade if I wanted to. If I had a lesser model and I wouldn’t be able to access the back of the system, I wouldn’t be able to make some more serious changes.

With an RTX 2080 Ti, our review configuration of the Obelisk can play just about any game at its highest settings. I played Battlefield V on ultra settings (including ray tracing on ultra) and the game ran between 42 and 54 frames per second.

On the Shadow of the Tomb Raider benchmark (highest settings), the Obelisk ran the game at 100 fps in 1080p, beating the gaming desktop average (99 fps) and both the MSI Trident X and the Alienware Aurora R8, but the Corsair One was faster (159 fps). In 4K, the Obelisk played at 33 fps, behind the Corsair One’s 45 fps.

The Obelisk breezed through our stress test, in which we ran the Metro Exodus benchmark 15 times on RTX settings to simulate roughly half an hour of gameplay. The Obelisk ran the game at an average framerate of 70.6 frames per second. On the first run, it ran over 77 fps, but quickly dipped to 72 before leveling out around 69 fps.

It took the Obelisk just 3 seconds to transfer 4.97GB of files. That’s an astounding rate of 1,696.4 MBps, and far faster than either the 588.5 MBps category average or any of its competitors.

On our Handbrake video editing test, we had the Obelisk transcode a 4K video to 1080p. It took HP’s desktop 5 minutes and 31 seconds, coming out ahead of the 6:20 average, the Aurora, Trident and Corsair One.

Depending on where you buy the Omen Obelisk, it’s possible they may come with a very basic keyboard and mouse. Ours, however, did not come with a mouse or keyboard. If it’s anything like the pack-ins that came last year, you’ll want to upgrade to something else. HP also sells Omen-branded gear, like its Photon mouse and Sequencer keyboard, but those will cost you extra.

The most important piece of software HP includes with the Omen Obelisk is the Omen Command Center, an all-in-one piece of software to check system temperatures and utilization, benchmark and overclock the CPU, control the RGB lighting on the inside of the case and the Omen logo and GPU as well as any Omen-branded peripherals.

HP also includes JumpStarts, which is useful for seeing your serial number and product number, but otherwise just provides some extremely basic tips. The bloat is limited to Netflix and a free trial of McAfee Personal Security.

HP sells the Omen Obelisk with a 1-year warranty.

If you’re looking to go cheaper, last year’s models are still available, with older configs  starting at $799.99. The cheapest Intel model, at that price, has an 8th Gen Core i5-8400, 8GB (1x8GB) of HyperX memory, a 1TB 7,200-rpm HDD and an Nvidia GeForce GTX 1060 (3GB GDDR5). Thats SKU has a micro ATX motherboard with only two RAM slots, so there’s less room for upgrading. It also has a lesser, 500W bronze efficiency power supply and a metal side cover, not glass.

HP’s Omen Obelisk is a sleek gaming desktop. And with the addition of a high-end Z390 motherboard and watercooling among its configurations, it can be a true powerhouse that will last you years.

HP describes the desktop as being upgradeable, and it should be lauded for using exclusively standardized parts. And while the glass window comes off with the press of a button, the right-side panel is difficult to replace because HP went for looks over functionality. If you can’t get that screw out, you won’t be able to make some major changes and keep the case for years. If you’re not making an upgrade that requires cable routing, this can last you a long time, with simple RAM and storage upgrades.

It’s small, but if you’re looking for something even more petite, the Corsair One i160 packs a punch in a much smaller space, but it’s significantly harder to upgrade and starts at $2,700. The Alienware Aurora is more expensive, so it’s not as good a value. The MSI Trident X, where it’s still available, is also compact and fully upgradeable, though its dual-chamber design may make it difficult for first-timers to disassemble and rebuild.

So if you’re buying a gaming desktop to buy, that makes the  HP Omen Obelisk a good value and a strong performer. Now if only HP would add a few more fans.