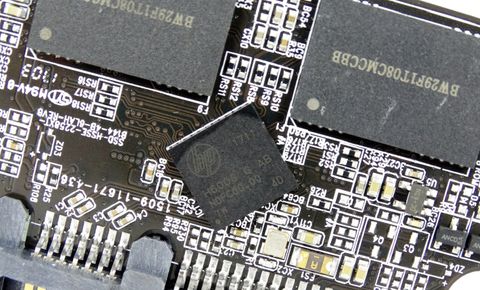 We begin our testing with the 500GB model. This is technically the 512GB capacity class, but we don't have a single drive that gives you access to the full 512GB of capacity. The Crucial MX300 with 384Gbit TLC die features 525GB of addressable capacity and still reserves a sizable spare area for background activity through overprovisioning.

All the comparison products retail for around $150, and that's around $50 less than the HP S700 500GB. The Samsung 850 EVO and Sk Hynix SL308 lead the performance charge. The Crucial MX300, Intel SSD 540s, Mushkin Triactor, Toshiba TR150/OCZ Trion 150 make up the second performance tier. All the comparison SSDs feature a DRAM buffer.

HP and SMI built a fast firmware for reading sequential data. SSDs rarely have an issue in this area, but some technologies take longer to fine tune than others. The S700 with the SMI controller outperforms the Crucial MX300 with a Marvell controller at queue depth (QD) 2. Both drives use the same 384Gbit TLC flash.

The S700 even delivers respectable sequential write performance. This is also due to firmware advancements, but performance drops as we fill the drive with data. Without a DRAM buffer to cache the abstraction map, data writes slow as the map is populated.

The S700's random read performance is much lower than the lower-priced DRAM SSDs in the chart. The S700 is still much faster than an HDD, but it's slower than most older SSDs.

Surprisingly, the S700's random write performance is better than we expected. The drive still sits second to the bottom of our low-QD bar chart, but it's competitive.

DRAMless SSDs don't tend to scale with queue depth in mixed workloads, and the S700 isn't any different. We observed just over 300 MB/s in this test.

Mixed random performance is similar. The S700 delivers around 9,000 IOPS during the test, and that doesn't change much as we increase the workload.

Entry-level SSDs are not designed for steady-state conditions, and that carries over to all very low-cost storage products. With that in mind, the S700 still managed to nearly match the Crucial MX300 and Sk Hynix SL308.

Companies like to tell us that DRAMless SSDs deliver enough performance for consumer workloads while reducing power consumption and cost. In the next few tests, we'll examine those claims and see where this product makes the most sense.

A high-performance consumer HDD (oxymoron?) delivers around 25 MB/s in this test. The HP S700 500GB provides a 10x improvement over a modern 7,200-RPM spinner.

Compared to modern SSDs, DRAMless drives like the HP S700 are more like the early consumer SSDs. The price should offset the heavy performance regression.

The DRAM buffer isn't an expensive component compared to the flash itself. Flash is the most expensive component in all SSDs, so losing the DRAM package eliminates only a small sliver of the overall price, yet performance takes a big hit. The latency penalty is very high even during light workloads. The S700 is still faster than a hard drive, but the performance results show it's not as good as a modern mainstream SSD.

The high service time calls into question the power-savings of DRAMless SSDs. The drive loses a component consumes a lot of power, but that is offset by the amount of time the drive has to work to complete the same tasks.

In these tests, we included the HP S700 Pro with a DRAM buffer and a slightly different SMI SM2258 controller. The first chart measures the system responsiveness (latency), and the second shows the amount of power each Lenovo Y700-17 consumes during the test. The S700 Pro used a lot of power, but the DRAMless S700 uses even more.

The responsiveness score looks like there is only a slight disadvantage for the S700, but this is a very sensitive test and every point counts.

The notebook battery life test shows us that DRAM-equipped SSDs can actually increase notebook battery life. This isn't what controller manufacturers claimed two years ago when the first DRAMless SSDs crept to market. Since that time, the controller manufacturers have slowly pulled back the power saving claims. Most of the companies use the same software we do, so it's easy to see why they don't push the power consumption marketing message now.