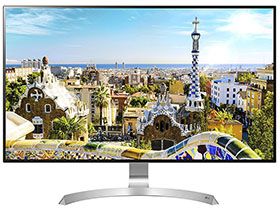 The LG 32UD99 has no significant flaws. It’s not really a gaming monitor but includes FreeSync anyway. Until more Ultra HD screens are available at faster refresh rates, displays like this will be better-suited to video and static content. In that regard, this monitor is superb. It offers great out-of-box accuracy and correctly-implemented DCI-P3 and Rec.709 color gamuts. And it does a respectable job with HDR10 content at a relatively low cost.

Not long ago, Ultra-HD monitors were a big deal, with even bigger price tags. Now it seems, they're somewhat passé unless they also include extended color and HDR support. Users have quickly discovered that resolution alone is not enough to ensure premium image quality. The extra contrast afforded by HDR, coupled with color gamuts extending out to the DCI-P3 standard make a striking difference when viewing the latest video and gaming content.

That said, creating good HDR is a challenge with LCD technology. Its native contrast is inherently low compared to plasma or OLED technologies. LCD simply can’t produce the deep blacks of those inherently emissive technologies. Dell found a good formula with the Dell UP2718Q we reviewed recently. By including a multi-zone backlight, it can create tremendous dynamic range, with static contrast scores exceeding 17,000:1.

LG is taking a simpler approach with its 32-inch, 4K-resolution 32UD99. Its backlight is arrayed at the edge like most computer monitors and televisions, but uses the highest-contrast IPS panel we’ve seen to date, rated at 1300:1. While it won’t deliver the deep blacks of a VA panel, it manages to beat out most of the competition in both performance and value. Let’s take a look.

The 32UD99 has similar specs to many high-end consumer televisions--3840x2160 resolution, extended color, and HDR10 support. But to that, it adds from-the-factory calibration for both DCI-P3 and Rec.709/sRGB gamuts. It also has a built-in auto-calibration feature courtesy of LG’s True Color Pro software. Making use of the latter feature requires buying additional software and a color meter kit from LG. But fortunately the out-of-the-box preset gamuts are quite accurate--enough so that calibration is not required.

For around $1,000 at this writing, those specs would be enough for us to declare the 32UD99 a good value. But there is FreeSync support here as well. Granted, its 40-60Hz range won’t knock any gamers socks off (and you'll of course need a compatible AMD graphics card to use it). But even the beefiest graphics boards won’t drive the action at much higher frame rates than that for the most demanding AAA titles.

LG bills the 32UD99 as a professional screen, and that makes sense given its emphasis on accuracy. We’ll perform our usual tests for both SDR and HDR performance, and we’ll take a look at the HDR Effect mode which adds a little extra punch to standard material. We’ll also play a few games to see how FreeSync enhances the experience.

The monitor's packaging is stout and sturdy, well up to protecting the 32UD99 from the rigors of shipping. Our sample arrived unscathed, despite having obviously been shipped more than once. The display arm bolts to a solid-metal base, then snaps onto the panel. Bundled cables include DisplayPort, USB-C with an adapter, and HDMI. These and the large power brick are finished in white to match the panel, and come nicely packaged in their own box. You also get a calibration data sheet, the accuracy of which we confirmed with our tests. A user manual is available on LG’s website.

LG is one of the only display companies to feature white trim on many of its products. It’s a nice break from the industrial black seen nearly everywhere today. No wonder the company's screens are popular with Mac users. From the front, the image is framed by a thin 7mm bezel. The arm is all-white while the minimalist base is made from cast aluminum, finished in a satin texture. The stand mechanism looks small but is more than up to the task of keeping the nearly 20-pound display stable. The anti-glare layer is similar to other monitors of this class and provides grain-free clarity with good light control.

The stand is solid and adjusts without any play or wobble. There is no swivel, but you do get 4.5” of height, along with 2° back tilt, 15° forward, and portrait mode (rotating the screen 90°). A small clip (white of course) is included to help with cable management.

All monitor functions, including the power toggle, are controlled by a single joystick/button combination. LG is a master of this particular user interface, and we love it (at least compared to less-friendly button-only interfaces). A single press turns on the juice. A second click brings up a quick menu, and a right-click opens the OSD. Navigation is simple, quick, and intuitive. Also on the bottom are two small grills for the five-watt speakers. They play with a bit more bass than most, and manage decent volumes without distortion. But most gamers and movie watchers will of course want external speakers.

The monitor's back is a sea of shiny white plastic, broken only by a small rear-facing input panel. You can remove the upright to expose a 100mm VESA mount. And the panel is quite slim, less than two inches thick. Everything has a premium look and feel from the styling down to the stand movements.

Inputs include a single DisplayPort 1.2, plus two HDMI 2.0 ports with HDCP 2.2 content protection. That last spec is a requirement for HDR10. USB is supported by a Type-C jack and two v3.0 downstream connectors. Analog audio is carried by a headphone jack that can also be used with powered speakers. The last plug on the lower right is for the external power brick.