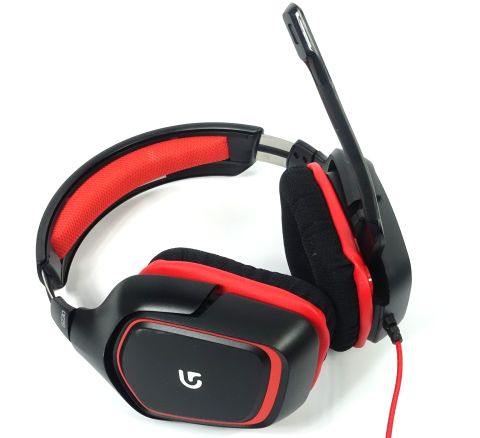 Logitech's G230 gaming headset is reasonably priced for what it is, however, if you're looking for anything close to quality acoustics, we suggest looking elsewhere.

A street price of $25 may be reason for us to go a little easier on Logitech's G230, so long as its look, feel, and performance correspond reasonably well. We certainly wouldn't pay this company's $60 list price. But a steep enough discount could make the G230 a good value.

Without giving away too much of our review up front, the G230 doesn't blow us away with its sound. What makes it an interesting option is the possibility that a bit of modding could make this headset so much better. After all, instead of copious adhesive holding the pieces together, Logitech still uses cross-drive screws.

Don't count on much in the way of a bundle. You'll be going straight from your PC's headphone-out/mic-in jacks to the G230's 3.5mm connectors without so much as a Y-adapter to make the pairing more convenient. If you really need one of those, they're inexpensive enough to buy separately. Otherwise, Logitech eliminates the free goodies to keep its price down, which we can appreciate.

The headset has been on the market for some time now. Consequently, its price has dropped significantly lower than list in the regions Logitech targeted.

Textile covering the ear pieces is black and orange (an obvious choice). This material is very coarse and it has a rough surface, which means that it attracts every little speck of dust around it. Fortunately, the cover is easily removed when you want to rinse it off. Extra points to Logitech for taking hygiene into consideration.

The headband and body are a suitable mix of plastic and textile, given Logitech's price point. They're certainly more durable than glued-on metal highlights and thin polyurethane. What results is a decidedly average look and feel, which stops short of exciting.

The G230 achieves an absolutely satisfactory fit. Even on large heads, you'll find a position that sits comfortably without pinching too tight. Just be ready to spend some time finding the right headband length.

Joints allow the headset to be adjusted on both the horizontal and vertical axes. Everything else can to be compensated for by pulling the frame out of the headband. The frame is made of light metal, and it's long enough to support a great range of head sizes. Meanwhile, the cable is safely enclosed within the frame in a kind of duct.

The upper joint's plastic piece, where two half-shells screw together, is a potential break point. We would have liked to see Logitech use at least one metal half, since any twisting motion, deliberate or not, is going to cause stress. Eventually, that's going to lead to cracking. Logitech does cover its G230 with a limited three-year warranty though, so we're at least impressed by the company's confidence in its build quality.

Large ear pads ensure that this is indeed a true over-ear headset. The contact pressure you'll endure is bearable, even for longer periods of time, without causing too much sweat. Sure, it's not a perfect solution. At the end of the day, though, it's alright for the price you pay.

There is a control unit built into the cable. You'll find a volume dial on its right side, along with a small mute switch for the mic up front. Both components could have been a bit bigger given the control unit's comparatively large size.

As mentioned, the ear shells can be rotated vertically, and even folded at up to 90 degrees. This makes the headset with a thickness of ~6cm quite a bit easier to store. Likewise, the microphone can be folded up completely.

Onto our original interest: modding. In light of the G230's low price, we doubt many enthusiasts will want to spend the time trying to make it perform better, particularly at the cost of a generous three-year warranty. But if our results prove fruitful, perhaps that might change. After all, this headset is easy to open up by simply removing its ear pads and unscrewing the red plastic cover. Then, four more screws are exposed, allowing the ear piece to be completely disassembled.

A resourceful modder could easily remove the small 40mm drivers and replace them, provided access to spare parts. For everyone else, this isn't really a viable option. But there is a small trick that might be worth trying. Installing a small insulating mat or some insulation wool inside the otherwise empty shells not only helps get rid of nasty resonance, it also makes the sound significantly crisper.

Of course, any attempt at modifying the G230 voids its warranty. And improper handling risks damaging the headset. Nevertheless, adding that bit of insulation does ameliorate the unpleasant buzzing and undifferentiated humming you'll hear out of the box.

The omnidirectional microphone is positioned at the end of a fold-out arm. Its rubber sheath is flexible to some extent. However, an optimal orientation is a matter of luck since the microphone sounds dull and murky to begin with. Too-little sensitivity and the resulting low output level cause performance in voice communication apps to suffer.

This next step calls for a bit of bravery, since the measured curve looks like an Alpine skyline during a lunar eclipse.

The bass, which is totally overemphasized (and really needs the insulation mod we just suggested), is the least-evil aspect of Logitech's sound quality. High intensity at the low end continues all across the upper-bass and into the lower mid-range, without showing much of a drop at all. Instead, said drop suddenly hits the mid-range.

Consequently, you end up with undifferentiated low-frequency reproduction. This not only sounds muddy, but it also negatively influences the upper-bass, including the fundamental range of male vocals. Men sound like bass-heavy opera singers, while female voices are softened to a choir of shy little mice.

In a situation as dire as this, an equalizer might not be enough to fix the curve. The slide between 200 and 450 Hz really does a number on the acoustic profile; it's precisely this range that makes or breaks the quality of reproduction for female vocals and many instruments. An extreme drop in sound level causes much of the range to sound pale and hard, sacrificing the warm and full-bodied tonal qualities we'd want to hear. Violins, oboes, and flutes simply collapse.

The rest of the mid-range is relatively meager, but at least it's there. Upper-mid-range frequencies, which are important for the spatial perception of sounds, are alright, so long as they're not overpowered by loud bass. Thus, gaming is where this headset can show off its only acoustic strength...that is, if you happen to be listening for footsteps and there isn't an M1 Abrams in the vicinity.

Completely unacceptable, on the other hand, is the extreme range reduction between 2 and ~3.5 kHz. Not only does the mid-range fail to deliver the warmth and fullness that it should, but this hole furthermore reduces the timbre of many instruments and hampers the recognition of human voices. It's exactly these two sound ranges that spoil any chance of enjoying a proper piece of music. Sure, a little too much bass can always be reduced. But nothing can bring back frequencies that simply aren't there to begin with.

The high- and super-high ranges are average, but that's not enough to save our impression of this headset. After spending some time listening to the G230, we found ourselves disappointed that Logitech chose this model for us to review. It'd be hard to fare much worse. And no amount of mod-friendly construction will help when the rest of the package fails to deliver.

A street price as low as $25 makes the G230 tempting to consider. But you'll probably want to listen for yourself before sending good money after bad performance.

As far as look and feel are concerned, Logitech's street price is justified, even if the plastic all around the upper joint leaves us skeptical of this model's longevity. Then again, a nice three-year warranty speaks volumes from Logitech's side. The G230's cables, strain relief, and connectors are all acceptable, in our opinion.

Of course, you're always going to make certain compromises when it comes to handling and comfort, particularly with a $25 headset. None of that bothers us. What really hurts is this model's acoustic capabilities. Above all, audible weaknesses in the lower-mid-range and problems in the lower part of the high-frequency range (timbre, recognition of voices/instruments) are major factors that keep us from drawing a more positive conclusion.

The almost obtrusive and imprecise bass doesn't help, leaving the decent spatial location of noises during games little more than a footnote. If the bass at ~250 Hz and below is reduced drastically, gaming improves to the point of being passable, though firearms continue sounding strange after being robbed of their natural timbre. Listening to music, unfortunately, is real torture no matter how you manually alter the sound.

For these reasons, Logitech's G230 fails to garner award recognition. It's not unusable, but in a direct comparison to other headsets in this price category, we have no reason to call it out specifically.