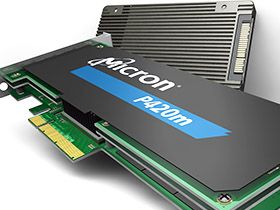 When we first starting seeing PCIe-based storage in the enterprise market, it was obscenely expensive. Tens of thousands of dollars per device was not unheard of. But like all flash-based products, prices dropped and they continue to do so. Some of this has to do with shrinking feature geometry. However, manufacturers are also getting more strategic about using the right flash technology for their products. If we were still looking at predominantly SLC- and eMLC-based drives, price per gigabyte would still be very high.

Now, we're talking about enterprise storage here, so write latency and endurance are factor very prominently in any discussion of performance. Many applications continue to demand the very best of the best. At the same time, IT managers are getting a lot smarter about how to apply solid-state tech to their workloads, which is why we're starting to see a lot more products built to deliver very fast reads at more economical prices.

This reflects a deliberate effort to break the enterprise SSD market into increasingly smaller and better-targeted pieces. Those read-focused SSDs represent one of the fastest growing segments because of how well-positioned they are. Typically, you get outstanding read performance from them, along with mediocre write throughput and endurance. In server caching applications, this trade-off is almost always worth it. They're so heavily weighted towards read operations that paying for equally great write performance isn't justified. And the trend is transcending 2.5" SSDs, carrying over to the PCIe-based storage market as well.

With the P420m's introduction, Micron is pushing MLC technology into its PCI Express-based product line. The two main benefits that come from using MLC NAND in 2.5" drives carry over: higher capacities and lower costs. Micron's P420m consequently serves to complement the P320h, which we reviewed in Micron RealSSD P320h Review: A PCIe Drive Capable Of 3.2 GB/s. To recap, the P320h is an SLC-powered monster that serves up excellent 4 KB read and write IOPS, along with great write endurance. It basically gives you all of the good attributes of single-level cell flash and PCI Express, along with the combination's greatest weakness, price. At $10/GB, the P320h is not cheap. Micron hopes that its P420m is more accessible without sacrificing performance.

The P420m is actually available in two different form factors. One is a 2.5" drive that connects via eight second-gen PCI Express lanes, and ships in 350 and 700 GB capacities. The second, which we're reviewing today, is a half-height, half-length (HHHL) PCIe-based add-in card, also communicating across eight second-gen lanes. This second version will surface in 700 and 1400 GB capacities, doubling the P320h's largest configuration.

As it does with most of its enterprise-oriented offerings, Micron is keeping pricing under wraps. Our sources tell us to expect less than $5/GB, though.

Based only on read performance, the difference between Micron's P420m and P320h is marginal, which is a good thing since the P320h excels in read tests. Given a significantly lower price tag, the P420m should represent a significantly better value in read-intensive tasks as a result.

Of course, write performance isn't as attractive. Although, while 95,000 random 4 KB write IOPS is quite a bit lower than the P320h's, that figure also represents the drive at steady state, whereas most mainstream SSD vendors cite fresh-out-of-box specifications.

Write endurance also takes a hit. Though, considering the rated specification is still 20% of the SLC-equipped drive, that's a really good sign.