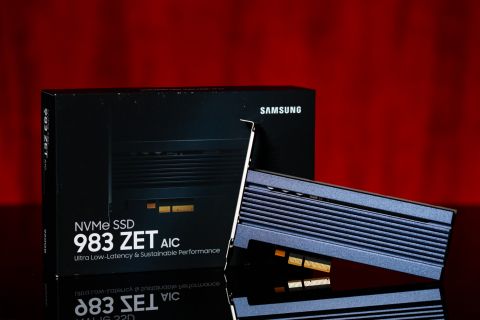 Samsung’s 983 ZET comes to the market at just over $2/GB. It boasts incredible performance specifications, but its ultra-low latency (under 0.03ms) races ahead of competing SSDs. The 983 ZET comes closer in performance to Intel's Optane devices and helps fill the gap between DRAM and flash in latency sensitive, read-intensive workloads.

Today we have Samsung’s fastest SSD yet, the 983 ZET, in the lab. This new SSD comes bearing Samsung's new Z-NAND, which is a faster form of NAND that the company sees as a competitor to Intel's Optane storage products.

The “Z-NAND Enterprise Technology” SSD, or ZET for short, is an enterprise part that Samsung markets as an ideal choice for AI and IoT where it can be used for applications such as hybrid caching and databases.

The same 8-channel Phoenix controller powers the 983 ZET as the consumer-grade 970 EVO, but unlike that drive, it doesn’t utilize TLC or even MLC flash. Like the Samsung SZ983 and SZ985 before it, Samsung packed the drive with its Low Latency V-NAND. Or in other words, a highly-optimized form of SLC flash.

Back in the early days of flash, each cell could only store a single bit of data, which is known as Single-Layer Cell (SLC) NAND flash. As time progressed, denser Multi-Level Cell (MLC), Triple-Level Cell (TLC), and now Quad-Level Cell (QLC) flash came to market, each storing more bits per cell. These denser flash chips enabled massive capacity increases and lower prices, but each additional stored bit resulted in reduced performance and endurance.

As more bits are added, the flash has to program even more voltage levels that are read from nanometer-scale cells. That requires very complex ECC algorithms to prevent data errors, and in many cases, it takes longer to read the cells.

Of course, manufacturing process enhancements brought on higher density through enhanced die capacity and improved speeds, but the rudimentary fact remains: Storing fewer bits per cell equates to faster performance and more endurance, largely due to the flash's simplicity.

That’s why the 983 ZET uses its new flash, which Samsung originally dubbed Z-NAND. Samsung created the new flash to compete against Intel and Micron’s 3D XPoint memory for workloads that require the lowest latency possible.

Now Samsung markets its Z-NAND as Low Latency V-NAND. This flash has lower latency than normal MLC or TLC NAND, but Samsung also tweaked the V-NAND design to extract the most performance possible. Samsung also optimized the data path and used a page size of 2kB or 4kB, rather than the 8kB or 16kB we see with most SSDs. This provides more parallelism so the drive can read and write smaller chunks of data at a faster pace.

This results in exceptional 4K random read/write latencies of just 0.03ms at a queue depth (QD) of 1. In contrast, TLC flash has latencies of 0.08ms or more.

Of course, Samsung’s 983 ZET boasts a five-year warranty and a healthy endurance rating of up to 10 drive writes per day (DWPD), or 17.5 petabytes of endurance. This is, however, much lower than Intel’s data center Optane SSDs that can withstand up to 60 DWPD.

Both full-height and half-height PCIe slot brackets come with the drive. Samsung also includes its DC SSD Toolkit for drive management purposes. With it, you can erase the drive, adjust over-provisioning, update the firmware, and monitor the S.M.A.R.T. attributes.

The Samsung 983 ZET is a PCIe 3.0 x4 HHHL (Half-Height Half-Length) Add-In Card (AIC). It communicates with the host via the NVMe 1.2b protocol. It features a beefy heatsink and a back plate to protect the components and dissipate heat.

Samsung’s Low Latency V-NAND features a 48-layer 3D design, which is notably less dense than Samsung's 9x-layer variants. Samsung chose to use the 48-layer flash due to its increased performance. Because the flash operates as SLC and has a density of 64Gb per die, it needs more flash packages than MLC or TLC SSDs to reach the 480GB and 960GB capacities.

The Phoenix controller sits close to the PCIe connector for the most direct pathway with the least interference. The controller is flanked by a single 1.5GB LPDDR4 DRAM package and three capacitors near the upper edge which aid with power loss protection, similar to many other HHHL designs.

Next Page 128KB Performance Results
Be In the Know