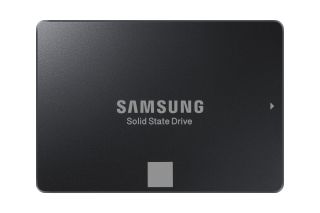 The Samsung 750 EVO is an interesting product for the SSD market leader (our review here). The drive first appeared in Japan but later gained additional availability with a focus on the system integrator market. The series is often overshadowed by the 850 EVO, but that may soon change. A new 500GB capacity size was just announced, and Samsung has officially changed the focus from system integrators to retail sales with availability to over 50 countries.

Samsung's strategy for the entry-level SSD market was to place the 850 EVO just a few dollars higher than the lowest-priced products available from other manufacturers. The 850 EVO costs more, but the price difference was always so small that users would pony up the extra money to increase performance and endurance. The strategy worked, and the 850 EVO is one of the best-selling SSDs of all time.

Low-cost triple-level cell flash from Toshiba and Micron have lowered entry-level SSD prices. Consumers can now purchase 512 GB class SSDs for as low as $100. Samsung can no longer sustain using the 850 EVO to combat entry-level products; the advanced V-NAND (3D) flash simply costs too much to manufacture.

When initially released, the 750 EVO appeared to be a solid competitor to new, ultra low-priced SSDs. In an odd maneuver, Samsung targeted the system integrator market with two low capacity sizes. The 120 GB and 250 GB products worked well for the intended market but failed to reach the fastest-growing SSD sales arena--512 GB. The new 750 EVO 500GB attacks the two issues. The press release outlines the changes in a subtle way:

The 750 EVO line-up is an ideal PC upgrade option that will turbo-charge users’ computing and multi-tasking needs at their home, school and office. With Samsung Data Migration and Magician software, upgrading to the 750 EVO from an existing storage device is quick and easy. The SSD also features reliable AES 256-bit hardware encryption to ensure stored data remain safe and secure. Unlike an HDD, the 750 EVO SSD has no moving parts, so consumers do not need to worry about the wear and tear on moving parts that can result in lost or corrupted data.

The market change and capacity extension give Samsung a competitive solution in the lowest-priced SSD retail tier and the fastest growing sector.

The 750 EVO doesn't just step in the new arena, it may soon dominate it. Traditionally, entry-level SSDs do not offer features like hardware-based encryption technology, high write speeds, or advanced software packages. Samsung steps onto the field with all of these features enabled. It's like taking the plate with a wider and longer baseball bat.

In order to achieve the lower price point compared to the 850 EVO, Samsung utilized planar (2D) TLC flash on the 16nm lithography node. This matches Micron's 16nm process, but Samsung has a much larger bit output from increased wafer manufacturing ability.

We suspect this was Samsung's plan from the start, but the company took baby steps to gauge market acceptance and to ramp up 16nm TLC manufacturing.