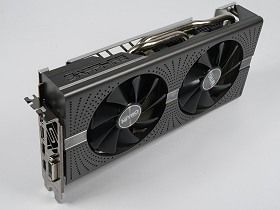 Power Supply and Board Layout

The board was designed by Sapphire, and its layout is quite a bit different from what we saw when AMD sent us the reference Radeon RX 480. A glance at the PCA reveals the GPU power supply’s six phases, which are prominently mentioned in the marketing material. Sapphire uses round polymer capacitors in all of the voltage regulator's critical places.

ON Semiconductor’s NCP81022 serves as the Nitro+ Radeon RX 580's PWM controller. But here's where the specs get a little confusing: this is a dual-output buck solution that can only control 4+1 phases, not six. If you need more evidence that Sapphire uses just three phases for the GPU, there are three 10A fuses on the right side of the board for the GPU and a fourth one on the left side for the memory’s single phase. The three 10A fuses limit Ellesmere's power to 360W, which is way more than enough. Even if they save the board from total destruction, you'd still have to RMA your card if any of the fuses blew. A TI INA3221 voltage monitor and emergency shutdown through the power supply would have worked as well.

So, how do we get from three phases to the advertised six? We don’t, at least not really. There are three phases that each have two voltage converters running in parallel. This is called phase doubling, and it’s achieved using a trio of NCP81162 current-balancing phase doublers on the back of the board. In reality, there are six real voltage regulator circuits, with three pairs that run in parallel.

More phases make for better balancing, but because they all come from those two auxiliary power connectors anyway, three phases should be close enough in this case. Each of the six supply rails (not phases) utilizes a Vishay SiC632 integrated power stage, which combines MOSFETS for the high and low side, a gate driver, a Schottky diode, and zero-current detection for improved light-load efficiency.

This configuration saves board space and money. Theoretically, the chip can handle up to 50A, though that number is a bit lower in practice. As a result, we're looking at power losses between 6 to 8W, totaling up to 50W of waste heat across Sapphire's board.

The memory’s power supply is comparatively simple. Its voltage converters are controlled by Anpec's APW8722 synchronous buck converter, and they consist of one ON Semiconductor NTMFS4C10N single N-channel MOSFET on the high side and two on the low side. They are driven by the motherboard's PCIe slot.

The memory is sourced from SK hynix, and just like Nvidia, AMD sells the GDDR5 with its GPUs. As a result, AMD’s partners don’t have the option to use faster memory.

These are 8Gb H5GQ8H24MJR modules (32x 256Mb) that can be operated at up to 1.55V, depending on clock rate. Just like Samsung’s K4G80325FB-HC25, they max out at 2000 MHz, or 8Gb/s. That's the fastest you can get from SK hynix, which doesn't leave much hope for aggressive overclocking. This is a shame, since the Radeon RX 480 benefited quite a bit from extra memory frequency.

Sapphire delivers both versions of its Nitro+ Radeon RX 580 with two BIOS files, selectable through a switch on top of the card. By default, they're set to use the more conservative frequencies. This is a change from the Radeon RX 480 generation, where Sapphire shipped its cards set to more aggressive clock rates. Apparently, lessons were learned from the thermal and acoustic fallout of that decision.

A Closer Look at the Cooler

The Nitro+ Radeon RX 580 Limited Edition's cooler needs enough headroom to handle at least 250W of waste heat without a problem. Below the shroud, two PWM-controlled axial fans from Dongguan Champion Electronics do their best to keep Sapphire's card cool. These are dual ball-bearing fans that top out in the 3250 to 3300 RPM range. The rotors have nine blades and a diameter of 95mm. They're designed to provide a broad and diffuse airflow, rather than a direct and targeted one.

Thermal density increases with fewer components shouldering the load. This creates hot-spots. Given what we saw from our walk-through of the Nitro+ Radeon RX 580's PCA, we know that just six components deal with as much as 50W of waste heat.

Consequently, Sapphire uses a backplate to help cool the card. It eschews the thick and inefficient thermal pads we dislike so much. Instead, there's a small aluminum heat sink positioned just below the hot spots on the board's back side. This makes it possible to go with a thin, much more effective thermal pad.

The heat sink makes direct contact with the backplate, leaving just a bit of thermal paste between them. This setup significantly improves cooling performance. Sapphire could have saved some money by stamping a depression into the backplate instead, though. Right next to all of that, on the left, we see the three chips responsible for phase doubling.

The cooler itself weighs 451g. It sports two 8mm and two 6mm heat pipes made of nickel-plated composite material. Those pipes are pressed into the back of a copper sink, which itself is surrounded by a light metal plate that makes direct contact with the heat sink and bottom of the cooler. It's responsible for drawing thermal energy away from SK hynix's memory modules.

The voltage converters get their own heat sink, which is integrated into the cooler. This should really help dissipate their significant waste heat. Moreover, this area receives lots of airflow. Consider us cautiously optimistic.

Sapphire's thermal solution isn't large or heavy, but its design looks good. The fins are relatively close to each other, providing lots of surface area. However, they aren't deep enough to necessitate lots of static air pressure. This makes the implementation less prone to annoying fan noise. Overall, Sapphire strikes a good compromise between all of the attributes we look at in a cooler.

Prev Page Introducing the AMD Radeon RX 580 8GB Next Page Ashes, Battlefield 1, Civilization VI, and Doom
101 Comments Comment from the forums
Be In the Know