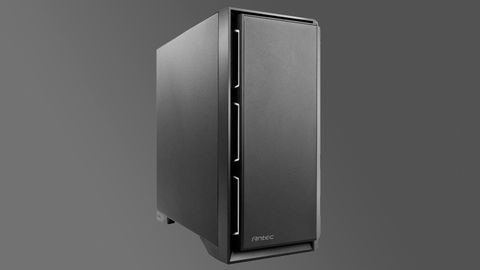 A small white box containing a variety of screws and zip ties comes packed into one of the open 3.5" drive bays. The case manual can be found on top of the PSU tunnel.

The interior of the Antec P101 Silent is painted white, with components such as hard drive racks and the PSU shroud painted black to match the exterior. This adds some visual style to the interior of an otherwise boxy black case. But without a case window, you're not going to be seeing the inside of the case after building unless you're upgrading or troubleshooting.

Given that this case is equipped with solid side panels, we found it a bit odd that the motherboard tray and PCI-E slot covers are painted white. Although the contrasting color scheme is a nice touch, no one will see these color accents. Antec could have put more of the color contrasts on the outside of the case, but that probably wouldn't appeal to everyone.

As far as storage options are concerned, the P101 Silent can accommodate up to eight 3.5-inch hard drives and a total of ten 2.5-inch SSDs (two dedicated, 8 convertible from 3.5-inch bays). The SSD drive rack is located on the back of the motherboard tray. All 3.5-inch hard drive racks are located in the main component compartment, directly in front of the intake fan mounting locations. The hard drive rack consists of four parts, each containing drive caddies for two hard drives. The racks can be removed separately to to accommodate various build configurations.

The chassis ships by default with three 120mm intake fans in the front. The rear exhaust fan location is outfitted with a 140mm fan by default.

We fitted the P101 Silent with power supplies up to 225mm in length without any issues.