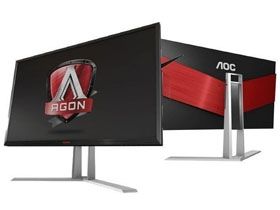 When it comes to computer monitors, there are plenty of choices available from multiple major manufacturers in nearly every category. But in the more rarified realm of gaming displays, it seems there are Asus and Acer, and then everyone else. Recently Dell broke into the gaming business with its SE2717H and S2417DG and pretty much hit a home run for performance and features. Now AOC is attempting the same thing, and in our minds it has succeeded with its new Agon line. With 27" flagships supporting FreeSync (AG271QX) and G-Sync (AG271QG), it seems poised to take on the established players with solid products.

If you’re already committed to Nvidia, then comparisons between the two 27" Agon screens are elementary. Buy the AG271QG, install, and enjoy. If you’re able to choose, however, we’ll make it easy for you: there’s no clear winner. The two screens are similar in some ways, different in others; but neither has a memorable advantage.

For FreeSync users the AG271QX makes do with a TN panel, which may nudge some towards the G-Sync camp if you're selecting starting with the display. But the QX includes a cool OSD controller while its G-Sync cousin does not. It also offers a lower price; $200 lower in fact.

But gamers are principally concerned about performance, in the area of motion processing as well as color and contrast quality. By those standards, the two monitors are pretty much the same. Both offer super quick panel response, quick enough that blur-reduction by backlight strobe is largely unnecessary. While this feature is nice to have for those few who don’t have adaptive-refresh-capable systems, it won’t see much use when G-Sync or FreeSync is in play. Input latency is also extremely low for both panels. We expect even the most skilled players to be satisfied with either screen.

Color accuracy and image quality is also very similar. Whether you calibrate or not, the numbers are quite close in our grayscale, gamma, and color gamut tests. The QX has a slight edge in contrast once adjustments are dialed in, but it’s a minute difference. The QG has that 165Hz refresh rate which will give it a slight edge in longevity. While only mega-buck systems can drive a game beyond 120 FPS, the AG271QG will keep up with future advances in graphics processing speed.

Obviously we’re happy with what we’ve seen from AOC’s G-Sync flagship. It and its FreeSync companion have provided a great introduction to the market for the Agon line of displays. We can confidently recommend either screen to any enthusiast, casual or discerning. The AG271QG commands a cost premium thanks to that extra hardware module, but it offers everything we’ve found in similarly-priced gaming screens from Asus and Acer. For its solid performance, build quality, and excellent gaming chops we’re giving the AG271QG our Tom’s Hardware Editor Approved Award.

Prev Page Viewing Angles, Uniformity, Response & Lag
8 Comments Comment from the forums
Be In the Know