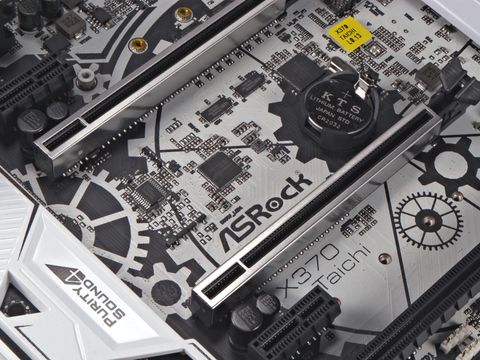 The ASRock X370 Taichi is perfect for those wanting to jump into the deep end of Zen for a long-term system build. This board is meant to be used with LEDs, windows, swagger, and posted to YouTube for the world to see.

The hype train is in full swing for Zen, and I am so excited that I can’t help but hit F5 on the UPS tracking website. Better yet, I am Ralphie waiting for his Little Orphan Annie decoder ring excited. I’ve been covering tired old AMD hardware from what feels like a decade ago. I can even forgive AMD’s marketing team for misspelling "risen." I’ve drunk the Ovaltine, crawled through the marketing material, and relived memories of a childhood spent on /r/pcmasterrace and building my first Athlon XP 1800+ back in the early 2000s.

And here we are. AMD's Zen has finally made its way to my test bench, and I get to look at the unsung hero of AMD's newest solution, the AM4 socket. It might not be glamorous, but it is this family of chipsets that enable Ryzen, Bristol Ridge, and Zen+ to go forth and raise battle against Intel. By converging CPU product lines behind a single socket, designers at AMD have found a way to reduce the number of supported chipsets while increasing the versatility of their socket's ecosystem.

AM4 comes in five different flavors: the enthusiast grade X370; mainstream B350; “essential” A/B300; and the elusive X300 chipset. X370 and B350 are my focus over the next few months, but the 300 models will no doubt get closer inspection once Zen based APUs hit the market. X370 is the younger brother to the 990FX, and B350 sheds a couple pounds to follow suit behind the enthusiast platform, just like the 970 chipsets. Both X370 and B350 support overclocking, while the essential builds are stuck in the slow lane.

Upon further inspection, there are some drastic changes to how AMD is choosing to deploy its CPUs into the consumer chassis. The Zen architecture is taking a page out of the SoC playbook by incorporating a lot of Southbridge functionality directly onto the die. Ryzen enables direct access to PCIe Gen3, USB3.1 Gen2, NVMe, and other modern interfaces directly off die in comparison to the Northbridge and Southbridge combos of old. To round out the platform, X370 enables connection to additional SATA, PCIe Gen 2, USB3.1 Gen 1 and 2, as well as the essentials for any enthusiast build.

With the plethora of connectivity options enabled by X370, ASRock has taken the bull by the horns and given us a board that will become the centerpiece to any PC builder's work of art. Reminiscent of our MSI 990FXA Gaming review back in 2016, the Taichi is a beauty. The matte black PCB, black and white color scheme, and steampunk-esque gear motif are jaw dropping. Everywhere I look on this motherboard I see polish, finesse, and thoughtful design.

The X370 Taichi takes an holistic approach to feature inclusion and puts everything on the table. At first I was confused as to why ASRock included the 802.11ac wireless antennae, but given the amount of style this thing has, this PC will be the center of attention at any LAN party.

Inside this premium board packaging are the usual suspects: four SATA cables, driver CD and user guide, antennae, individually wrapped retention screws for the M.2, high bandwidth SLI bridge, and a postcard to write home to mom that you spent all of your tax return on a computer! The back panel provides standard Ryzen I/O, giving access to USB 3.1 Type A and Type C, and six USB 3.0, in addition to five port audio, SPDIF, WiFi antennae, and a clear CMOS button.

The IO shield covering the audio portions of the board is not overly gaudy and provides contrast against the black board. Where I'm used to seeing white silk screened letters cluttering up the planar, I see text that melds among the components. And where I typically expect some cut corners, ASRock includes top notch connectors, components, and strategic intent on where these features are placed. I find nothing wrong with this board — words I have said about only one other product.

Dual PCI-E Steel Slots are intended for dual GPU deployments while the third x16 slot is of the standard black variety. If you're using multiple M.2s, this black slot is disabled. Speaking of M.2, the Ultra M.2 port enables 32 Gb/s PCIe Gen3 NVMe. Purity Sound 4 makes its way to the planar, and audiophiles will enjoy the emphasis on providing superior audio to the front HD audio ports.

Options for programmable RGB LEDs amp up styling. The Promontory chip has LEDs surrounding its edges, and there are locations in the center of the board that allow for direct connection to user supplied light strips. The ASRock RGB LED utility enables complete customization of these LEDs so that frequent reboots to access the UEFI are not necessary. If only I were so shallow, this review could end and looks alone would set this apart from the competition.

Next Page X370 Taichi's UEFI: Growing Pains
31 Comments Comment from the forums
Be In the Know