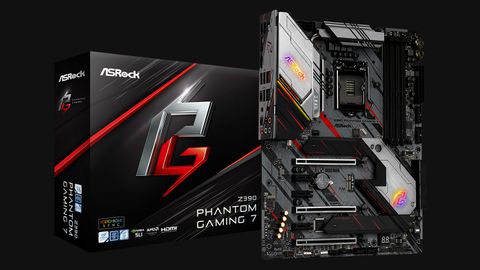 The Z390 Phantom Gaming 7 might fill a gap in ASRock’s Phantom Gaming portfolio, but a quick overview of its headers shows remarkable similarities to the company’s Z390 Extreme4. An extra Ethernet port fed by Realtek’s 2.5GbE controller marks its major improvement over the non-Phantom-series board, though the Phantom Gaming 7 also adds a “Port 80”  two-digit diagnostic display, onboard power and reset buttons, and a heat spreader for the upper M.2 drive slot. While users could purchase a separate Reatek 2.5GbE card for the Extreme4 for as little as $30, those lesser additions could make up the rest of the Phantom Gaming 7’s $40 price premium over its Extreme4 sibling.

Less obvious is the revised voltage regulator, which features fewer higher-capacity phases to address the power fiasco revealed in the Z390 Extreme4. Condemning the Extreme4 might not be the best way to promote the Phantom Gaming 7, but the new design gives us hope for expanded options in the sub-$200 enthusiast motherboard class.

Likewise, the additional heat spreader for the upper M.2 slot, while advertised as a benefit to end users, complicates SSD installation. That’s due to the heat spreader being integrated with the Z390 heatsink, which requires builders to remove the entire assembly to install the upper drive.

The second and third PCIe x1 slots are open-ended to enable the installation of cards with longer interfaces (such as x4), though doing this with the lower slot requires leaving off its M.2 head spreader. PCIe x16 slots are resourced as x16/x0/x4 or x8/x8/x4, with the top two slots sharing the CPU controller’s sixteen pathways and the lower slot competing with every other device (including M.2, USB and SATA) for bandwidth through the Z390 chipset’s 32Gb/s DMI.

The lower M.2 storage slot supports drives up to 110mm long, while the upper supports the common 80mm standard at most. In the center, an M.2 Key E slot supports both PCIe/USB and Intel CNVi module standards for notebook-style wireless cards.

An extra SATA-based PCIe controller expands Z390 Phantom Gaming 7 legacy drive support, though the reason for this might not be immediately clear: Two SATA ports are disabled for each M.2 SSD a user installs.

A single second-generation front-panel USB 3.1 header resides above the SATA slots, but it’s limited to USB 3.0 transfer rates (5Gb/s). Though the data rate is only half of what the connector was designed to support, its inclusion allows users to connect the matching front-panel cable of their high-end case.

Similarities to the Z390 Extreme4 extend to the I/O panel, where placement is identical for the ports both boards have in common: The Z390 Phantom Gaming 7 loses the cheaper board’s VGA output and gains a second network port, with the single PS/2 keyboard/mouse, four USB 3.1 Gen1 (5Gb/s), DisplayPort 1.2 and HDMI 1.4 for onboard video, two USB 3.1 Gen2 (10Gb/s Type A and Type-C), five analog I/O and single digital audio ports remaining. Even the empty antenna holes are in the same location, though the Phantom Gaming 7 gets upgraded to a factory-installed (rather than snap-in) I/O panel shield.

The Z390 Phantom Gaming 7 includes four SATA cables, a legacy SLI bridge, M.2 mounting screws, a driver and application disc, a multi-language user manual, a software setup guide, a case badge, and a postcard. Currently in somewhat of a retro resurgence, postcards were the snail-mail predecessor of Instagram, where the picture promoting what you were doing was provided for you.