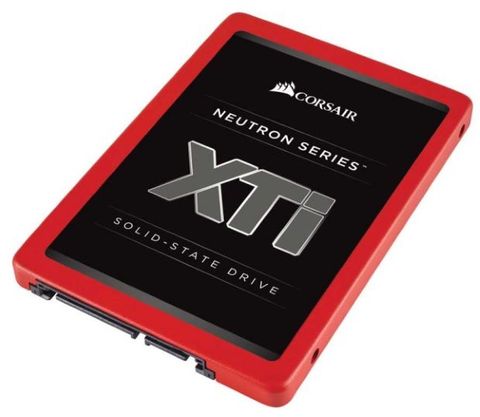 The Corsair Neutron XTI series is our first high-performance SATA 6Gbps SSD review in some time. We created a diverse mix of mainstream and premium products for the test pool used in this review.

The Samsung 850 Pro and SanDisk Extreme Pro dominate the high-performance SATA market. Both ship with a 10-year warranty and deliver the highest performance in this category, but we prefer the Extreme Pro for its class-leading performance consistency under heavy workloads. The Intel SSD 730 falls in the same category, but it is often overlooked due to its high price and shorter warranty period.

The Samsung 850 EVO dominates the mainstream SSD category with a comparatively long 5-year warranty, impressive performance and legendary reliability. The SanDisk Ultra II and the 750GB Crucial MX300 round out the list of 512GB-class SSDs.

The Corsair Neutron XTi 480 GB dominates the sequential write performance test, but many of the SSDs trail close behind. The write workload is the second test where the smaller capacity XTi overshadows the larger model, which has more flash and DRAM. The big performance from the small package is noteworthy because the larger SSDs usually outperform the smaller ones.

Not even Corsair with its double-dose of DRAM could nudge the Phison S10 up to 10,000 random read IOPS at queue depth 1. Phison has worked hard to increase random read performance over the last year, and we've noticed some modest gains in this area, but it is not enough to match Samsung's premium and mainstream SSDs.

The XTi products trail every other SSD on the chart in small block random read performance, with the exception of the 3D TLC-powered Crucial MX300 (which has a 4-channel controller handicap). The random read performance is disheartening and will show up later in the review as we examine workloads that are more advanced.

The Neutron XTi's random write performance also trails the other SSDs at queue depth 1. The XTi SSDs do a little better as we move higher up the depth range, but performance parity with the best SSDs doesn't come until the high queue depths.

The XTi's high sequential performance carries over to the 80 percent mixed workload. At queue depth 2, the XTi SSDs are close to the Samsung 850 Pro and manage to match the 850 EVO. The Neutron XTi SSDs increase their sequential performance as the workload intensifies and remain competitive throughout the remainder of the test.

The low random read performance takes a heavy toll on the Neutron XTi's mixed small block performance. Historically, this is the one area that Phison struggles to master, and the company has suffered from the low mixed random performance for several product generations. On the next page, you will see how subpar mixed random performance affects real world applications, which often consist of a heavy concentration of 4KB random blocks of data that the operating system loads into memory.

Phison's S10 firmware team has spent a lot of time increasing the sustained steady-state performance for enterprise applications, and the Neutron XTi gained some performance increases from progress in that area. Most users will never encounter an intense steady state condition without using extreme corner case workloads, such as very heavy A/V production on a computer that is dedicated solely to that purpose.