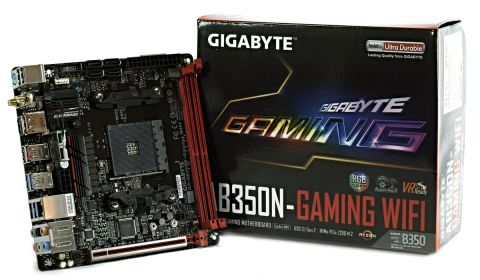 PCMark hasn’t been kind to our more recent review samples, with the Killer SLI/ac going down in a hefty defeat, even compared to the Gigabyte newcomer. The work suite is especially rough the ASRock board.

Sandra shows no favorites in the arithmetic tests, and the multimedia results are within a single percentage point between all the samples. The Gigabyte board takes a huge performance hit in Cryptography, showing double digit deficits. Hashing performance is acceptable, but we are curious if our version of Sandra could use an update to better interface with the Ryzen chipset drivers.

Cinebench shows some oddness in the single-threaded results, but engaging all of the threads shows middle of the pack performance for the B350 board compared to the bigger brothers. With Compubench, we can confirm that we are observing some driver related issues with our GTX 970, where the FaceDetect workload is performing considerably worse than it did during previous tests. Beyond that, all Gigabyte test results are within one percentage point of the sample averages.

The driver issue only surfaces once we kick in Skydiver on 3DMark workloads, showing a 5% delta from the leader. That gap vanishes once Firestrike takes over, and Firestrike Extreme performance is within expectations. Unfortunately, the trend for this board is that the Ryzen processor is just not performing up to the X370 measurements we have previously reported.

During our application tests, the AB350N-Gaming WiFi comes up short, lagging behind in Handbrake by nearly one minute. Blender CPU shows similar delays, and the Gigabyte board lags behind in Lame by two seconds. Adobe applications show some mixed results, but nothing astonishing.

The big detractor here is the 7-Zip workload, where the Gigabyte board shows a two-and-a-half-minute loss behind the Killer SLI/ac.

This time around, we only tested the AB350N-Gaming WiFi with Ashes of the Singularity: Escalation to better standardize our 4k monitor methodologies across all test benches. As we know, Escalation contains improvements for the Zen architecture, so having this newer data side-by-side with older data will be interesting. At 1080p settings, we are seeing nearly a 20% performance increase on max batches at the high and crazy presets in most cases.

At 4k, the Gigabyte AB350N-Gaming WiFi and ASRock Killer SLI/ac use Escalation and the true 4k monitor, while the Gigabyte AX370 Gaming 5 and MSI Krait Gaming use the pseudo 4k setup and regular Ashes. In theory, the improvements in Escalation could offset the performance loss from the increased pixel count. The big improvement comes with the Crazy preset, where the combination of Escalation and 4k actually beats the old implementation!

The test methodology for the Gigabyte AB350-Gaming WiFi nets it some positive percentage points, but still shows enough deficiencies to keep our performance metrics honest.

Metro Last Light: Redux gives us a bit of a reprieve, showing very little difference between the samples regardless of graphics driver at 1080p. At 4k, the Gigabyte AB350 performs admirably, especially since it's only running a GTX 970, and ultra-high only makes this configuration slightly less playable.

The Talos Principle continues to be the odd man out with our data set. At 1080p, gains of 10 FPS are achievable, and at 4k we enjoy the six extra frames on the minimum measurements to help keep frame rates closer to 60Hz despite playing at true 4k.

We've noticed that ever since the update to 301136 that our Talos Principle data has provided performance boosts between 5-15 FPS in our tested resolutions and detail settings. As we continue testing, we will be phasing out the older results in favor of the latest update.

F1 2015 has us puzzled. After confirming that results are repeatable and double checking several other configuration files and detail settings within our setup, this Gigabyte AB350-Gaming WiFi runs between 15-20 FPS behind our other samples at 1080p. Given the different output resolution from our Nvidia Surround 3460x1920 setup, the results line up more with what we are expecting, though they still lag behind the more standard ASRock X370 Killer SLI/ac. Regardless, we observe an enjoyable experience at both resolutions and conditions.

Unfortunately for the Gigabyte AB350N-Gaming Wi-Fi, performance metrics across all of our test suites are less than average with the exception of gaming. The MSI Krait is still sitting pretty at above average marks for all genres, and the Gigabyte AX370 is a close second.

Bear in mind, this is our first B350 sample, and we expect to see a performance difference comparatively. Lagging behind by only roughly 6% compared to these more expensive boards is commendable, and with any luck overclocking might turn the tide for this mini-ITX product.

Overclocking was straightforward with this board. Bumping up the multiplier to 38 was painless, and the Corsair H110i kept temperatures in check. A more aggressive 38.5 multiplier boots and runs Prime95 for a few minutes, but the system eventually falls to its knees. The Aorus Gaming 7’s setup of 1.3875V at medium loadline values showed stability for 30 minutes and gave us hope that we could hit the elusive 4 GHz rate. Unfortunately, this just wasn’t enough voltage to keep the system online for longer periods. Dialing the multiplier back to 38.75 keeps us stable for about four and a half hours.  The 1.3875V bump ultimately provided stability overnight at 38.5 with Prime95, which is very similar to several of the X370 boards we have tested.

And let’s not forget memory. Right out of the box the AB350 supported DDR4-3200MHz with our Trident Z kit. Updating to the latest version of the UEFI did not get us running at DDR4-3333MHz, however. Gigabyte’s website does indicate that we have access to AGESA 1.0.0.6b now, so improved stability for more memory ranks and capacities should be expected.

*Note that the ASRock Killer SLI/ac was reviewed using the Noctua U12S, while the remaining three samples employ the Corsair H110i. This Ryzen 7 1700X runs 2°C cooler on the AB350 when we compare against the average of the water-cooled systems. CPU1 Diode deltas fall in line with our observations with various products tested with this particular processor.

Mini-ITX is not our friend in this experiment. We observed regulator thermal sensor readings in the 120°C range under stress. It is shocking how the four-phase design is sturdy enough to handle that pressure. Reverting back to stock speeds to gather thermal IR readings still leaves the regulators cooking. Measuring in at 59°C above ambient, extended overclocks at this setting are not recommended. Regardless of the form factor, we think adding a few millimeters in height or adding more fins to the Vreg heatsink would have made a drastic improvement in thermal performance. As for the remaining thermal measurements, AIDA64 shows CPU measurements of 20°C above ambient, and CPU Diode measurements in the 35°C (above ambient) range, very similar to the boards we tested using the Corsair H110i cooler.

Staring at the Kill-A-Watt on our wall, each of these systems is lining up within a few watts of each other except for our notable MSI X370 Krait Gaming. The Gigabyte AB350N-Gaming WiFi draws anywhere between 5-15W more than its bigger brother. We won’t consider that a loss, but it’s definitely not a win for the small form factor board.

Now that we’ve shuffled the motherboard deck a little bit, there’s more of an efficiency story. The ASRock X370 Killer SLI/ac is nearly our base metric, while the Gigabyte AX370 Gaming 5 and Krait are near inverse images, with the former favoring efficiency and the latter favoring . . . non-efficiency.  Unfortunately for the AB350N, average performance is what drags the board down. It shows negative marks in all categories.

The Gigabyte AB350N-Gaming WiFi wins hands down in the value equation by costing $30 below the sample averages. Some may argue that we are comparing apples and oranges. Sure, the B350 chipset has fewer I/O options and less storage by definition, but it delivers where it matters for most enthusiasts at the lower end. Further, the AB350N hits overclocks similar to some of the more expensive boards, performs within 5% of the competition, and does so in a compact form factor.

We suggest either cube or inverted mini-ITX cases with this board. Take the extra $30 to the bank, shave $100 off with a Ryzen 5 or 3 CPU, and this mini-ITX solution can be a dream for anyone’s sleeper build or LAN rig. Indeed, we’d recommend this board for any mainstream budget builder looking for a compact build with no plans of expansion.

Prev Page How We Test
12 Comments Comment from the forums