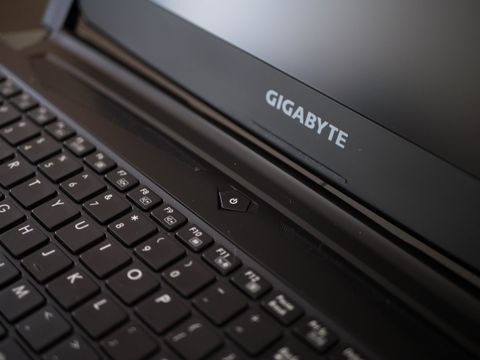 Additionally, we’re comparing the P57W v6 to the Asus Strix GL702VM-DB71, which is equipped with an i7-6700HQ CPU, a 6GB GTX 1060 GPU, 16GB of DDR4-2133 memory, and a 1TB HDD. The 17" Strix received our Editor Approved award because its performance almost matched that of the Asus Strix 15, but the poor display and thermal performance held it back.

3DMark scores are primarily determined by how powerful the system’s GPU is. The GTX 1060 does well in 3DMark, and our Gigabyte P57W v6 has ample performance in particular. Both the Asus Strix 17 and the MSI Apache Pro come close, but the only convincing defeat the P57W faces is against the P37X and its more powerful GTX 1070.

The Cinebench tests are more CPU focused, so the GPU has less of an impact on the score. Since all three of the GTX 1060 laptops are equipped with an i7-6700HQ, we don't see much of a difference in the single and multi-core tests. A more powerful GPU does have a slight impact on the OpenGL shading score, putting the Gigabyte P37X ahead here.

CompuBench is more platform dependent, and grants a slight edge to systems with a strong GPU. Therefore, the P57W is outdone only by its fellow Gigabyte P37X, which scores about 21% and 28% higher in the Video Composition and Bitcoin Mining tests, respectively. The MSI Apache Pro is the only system the P57W beats outright.

The LiteON CV3 isn’t nearly as fast as either of the Samsung SM951s, which both have virtually equivalent random read and write speeds. In sequential speeds, the CV3 nearly catches up to the Apache Pro’s smaller SM951, but no cigar.

We use PCMark to run Adobe Creative and Microsoft Office workloads, which provides scores based on a system’s home, office, and creative performance. All of the systems in question have an I7-6700HQ, so there's not much of a difference here -- the scale of the chart makes the differences look more pronounced than they really are.