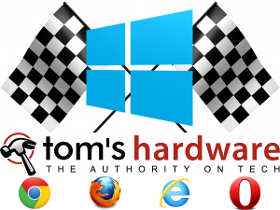 Windows 8: Is Web Browsing Any Different?

But before we get to the benchmark results, let's quickly brush over the Web browser news and events that transpired since our last installment.

As usual, it has been an eventful couple of months in the world of Web browsers, and Windows 8 shakes things up even more.

Although Windows 8 didn't exactly do anything for the performance of productivity-oriented applications or gaming, and it didn't save AMD's FX. But we haven't yet seen how Microsoft's new operating system affects Web browsing.

Next Page Chrome, Firefox, Internet Explorer, Opera
89 Comments Comment from the forums
Be In the Know